After a 10TH at Perris Auto Speedway, Williams Heads to Bakersfield 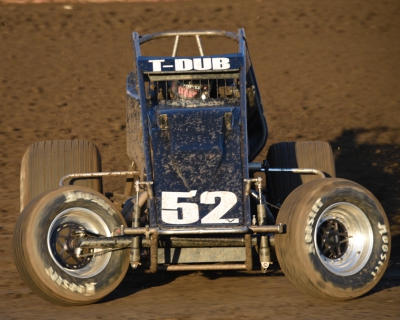 After recording his 5th top ten finish in five starts this year at Perris two weeks ago, Trent Williams is headed to the “California Country Music Capital,” Bakersfield, for a race this Saturday night, May 14th at the Bakersfield Speedway.  The race will be the first of two on the track for the Apple Valley, CA resident in 2022.

For Williams, Saturday’s race will be his first on the track that is billed as “The West’s Fastest 1/3 Mile High Banked Clay Oval.”  He heads into the USAC/CRA portion of the program, which will also include the California Lightning Sprints, NMRA ¾ Midgets, and Hobby Stocks, 15th in the championship standings.  However, he is a mere nine points out of 13th and is only 33-points out of 10th.

In his last outing at Perris, Williams finished in 10th.  That broke a string of six straight ninth-place finishes dating back to 2021. The Cal State Fullerton graduate ran as high as eighth in that 30-lapper.  For the entire race, he participated in a war with seven others that see-sawed back and forth much to the delight of the Perris crowd.

After five races, the driver known as “T-DUB” has a main event finishing average of 9.20.

After four races in the month of April, Williams and the other USAC/CRA stars have a more relaxed schedule in May and June.  After this week’s race in Bakersfield, Williams gets a week off before returning to Perris Auto Speedway for the prestigious “Salute To Indy.”  That race dates back to the 1940s.

In June, Williams will get to race at one of his favorite tracks, the Ventura Raceway, on June 11th. The famous track is located adjacent to the beach on the historic Ventura County Fairgrounds, which first saw motorsports events 98-years ago.  Two weeks after that, he returns to Perris for the inaugural “Bubby Jones/Ray Sheetz Memorial.”

Williams would like to thank marketing partners Victory Boys Performance, Sorrento Homes, and JasonR.Photos for making it possible to race his Maxim Chassis/Shaver Engines #52V during the 2022 season.  He also wants to send a special thanks to Russell and Jean Martin for the use of their truck and trailer to get the #52V to the track last week.  If you or your business would like to be a partner of the Victory Boys racing endeavors, please call (760) 780-8782 or  mailto:[email protected]gmail.com.