Nicolo Rocca opens the seasons on a high note 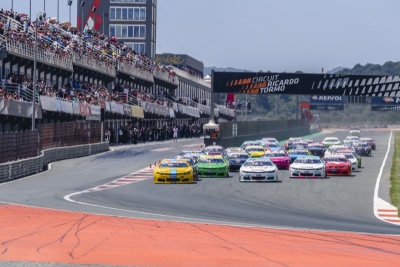 Joining NASCAR Whelen Euro Series powerhouse CAAL Racing in the very last minute turned out to be the right decision for Nicolo Rocca. The Italian started EuroNASCAR PRO Round 1 from second place and grabbed the lead right at the start. After 18 thrilling laps and two cautions, the 28-year-old sped to victory with an amazing performance at the wheel of #56 CAAL Racing Chevrolet Camaro. Rocca grabbed CAAL Racing’s 34th win in the team’s 100th EuroNASCAR PRO race.

In his 84th EuroNASCAR PRO start, Rocca scored his fifth career win since joining EuroNASCAR back in 2013. Since then the Italian has always been a key figure in the championship battle, but he is still seeking the elusive first EuroNASCAR championship ring. While starting the season on a high note, the CAAL Racing driver will for sure aim to finally write his name in the Whelen Hall of Champions in Charlotte, North Carolina.

At the beginning of the race, Rocca got past pole sitter Alexander Graff and took over the lead. Despite two caution periodes, Rocca kept calm and mastered two restarts with all his experience and race pace. The Italian crossed the finish line 0.602 seconds ahead of Tobias Dauenhauer, who also got past Graff in the early stages of the race. For Rocca, it was not only another win on his tally but also the 32nd top-5 result of his EuroNASCAR PRO career.

“I’m speechless right now,” said an emotional Rocca in the Victory Lane. “I raced for this, I raced to be in a good car. I know that I have it. If you put me in a good car I know I can fight for the win and then everything today is perfect! I’m so glad to be back with the CAAL guys, I’m speechless. It was amazing!”

Dauenhauer had a perfect start from the second row of the grid and overtook Graff for second place. The German, who was runner-up twice in EuroNASCAR 2 in the past years, made a almost perfect debut in EuroNASCAR PRO – his father had already expected to see him inside the top-5. The Hendriks Motorsport driver stepped onto the podium in his very first EuroNASCAR PRO race and therefore started a promising season in Europe's top NASCAR division. He also won the race in the Junior Trophy for drivers aged 25 or under.

Graff ultimately finished third with a strong run in his #64 Speedhouse Ford Mustang. After grabbing his maiden Pole Award in EuroNASCAR PRO, the Swede on one hand lost two places but on the other hand showed plenty of potential. “The best is yet to come,” said Graff right after the race, who’s aiming to score his maiden EuroNASCAR PRO win in the 2022 NWES season.

Three-time Champion Alon Day climbed to fourth place after a wild comeback from 16th position on the grid. The Israeli bested reigning EuroNASCAR 2 Champion Martin Doubek, who not only closed the top-5 but also won the race in the Challenger Trophy for bronze and silver drivers in EuroNASCAR PRO. Frederic Gabillon followed in sixth ahead of Giorgio Maggi, the second best Junior Trophy driver behind Dauenhauer.

Another impressive comeback was the ride of Lucas Luhr: the German was shuffled to the back of the field in the opening laps but managed to climb back up to eighth in the #58 Racingfuel Motorsport Chevrolet Camaro. Max Lanza, second in the Challenger Trophy, also made a fantastic comeback as he came from 32nd on the grid to finish ninth under the checkered flag. Gustas Grinbergas, third in the Junior Trophy, rounded out the top-10 while Cosimo Barberini completed the Challenger Trophy podium in 13th place.

The first caution was deployed on lap 4 when Dario Caso got stranded in his #8 Racers Motorsport Chevrolet Camaro in the gravel trap. The second safety car period was triggered on lap 10 after Bernardo Manfre, Riccardo Romagnoli and Nicolo Gabossi tangled together on Turn 1, all three drivers retiring on the spot. Afterwards the race control decided to restart the race in single file.

Further incidents occurred on lap 13 when Marc Goossens and Fabrizio Armetta were forced to park their cars off track while Sebastiaan Bleekemolen, Vittorio Ghirelli and Gianmarco Ercoli, three championship contenders, had trouble early in the race. The trio ended up 24th to 26th, although Ercoli managed to set the fastest lap of the race and therefore grabbed the pole position for Sunday’s EuroNASCAR PRO Round 2.

Aliyyah Koloc, Claudio Capelli, Ian Eric Waden and Davide Dallara also encountered problems during the race while Romain Iannetta had to drop out of the top-5 contention late in the race after experiencing technical problems with his car.

While the EuroNASCAR PRO drivers will be back in action on Sunday, the EuroNASCAR 2 season will kick off on Saturday afternoon. The race will be broadcasted live at 4:55 CEST on EuroNASCAR’s social media channels – YouTube, Facebook, Twitch – and Motorsport.tv as well as many more TV services from around the world.