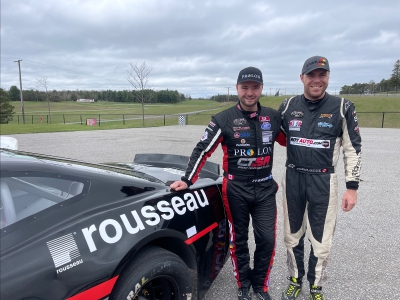 The racing season officially opens this weekend with the NTN Ultimate Bearing Experience 250 at Sunset Speedway, Innisfil, Ontario. Jean-Philippe Bergeron is looking forward to getting behind the wheel of the No. 1 Jacombs Racing Mustang for his first career start in the NASCAR Pinty's Series. Bergeron will run all 13 races on the 2022 schedule. "I'm ready for a new challenge! Driving alongside the big names in Canadian NASCAR raises the bar and that's what I'm looking for. I want to compete against the best to become better", said the 23 year old driver, the only Quebecer in contention for the Rookie Championship this year.

Earlier this month, Bergeron had two days of testing at Sunset Speedway and CTMP (Canadian Tire Motorsport Park) to test the car with the new Ford Mustang chassis. Dave Jacombs' team tested the car's parameters and made the necessary adjustments. Racecar driver Alex Labbé joined the team for the occasion. It's worth noting that Jacombs Racing was the team that Labbé won the NASCAR Pinty's Championship with in 2017. "I'm pretty impressed with the performance of the car and the times Jean-Philippe has set. It bodes well for the start of the season," said Labbé, who not only coached Jean-Philippe but also helped prepare the car.

Mario Gosselin, owner of the DGM Racing team in which Alex Labbé competes in the NASCAR Xfinity Series in the United States, will also be on hand this weekend to lend a hand to the team. Bergeron will be able to count on his support for part of the season, when the race schedule allows him to travel back and forth to the country. "In 2017, when Alex won the NASCAR Pinty's Championship with Jacombs Racing, I was the crew chief. I have great memories of that. I think we might be surprised at what's in store for us in 2022 with Jean-Philippe," said Gosselin, whose reputation in North American stock car racing is well established.