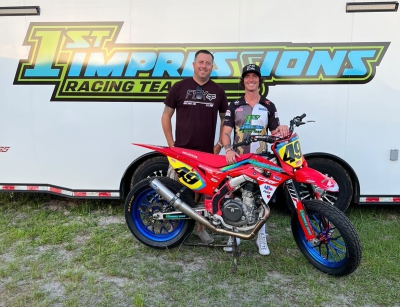 1st Impressions Race Team announced today it has signed Chad Cose to compete aboard a Honda CRF450R in the Parts Unlimited AFT Singles presented by KICKER class for the remainder of the 2022 Progressive American Flat Track season.

A seat on the four-rider effort opened up following the injury of Michael Lainhart at Texas Motor Speedway. Lainhart suffered a tibial plateau fracture and torn meniscus after colliding with a bike that went down directly in his path and now faces several months of recovery.

Despite the disappointing setback, 1st Impressions Race Team was fortunate to land the services of a rider as accomplished and motivated as Cose.

The Californian boasts more than a decade of professional experience, during which he has continually improved his racecraft and speed. Over the past five years in particular, Cose has established himself as a genuine front-running force across all three Progressive AFT classes.

He took his career to new heights in 2018, earning a first-career premier-class podium finish among his 12 top-ten finishes to secure sixth place in the Grand National Championship. He then took the undercard by storm, winning races in Mission Production Twins presented by Vance & Hines and Parts Unlimited AFT Singles in 2019 while finishing the season ranked inside the top five in both categories.

He continued his winning ways in 2020 and 2021, highlighted by championship runner-up honors at the conclusion of his ‘21 Mission Production Twins campaign.

In his new position with 1st Impressions Race Team, Cose will focus all his efforts on Parts Unlimited AFT Singles with the goal of securing the team a maiden victory in its third year of competition.

Team Owner Eric Hoyt said, “Leading up to this season, (Team Manager) Sandriana (Shipman) and I were set on fielding a four-rider team. Due to the unfortunate injury of Mikey Lainhart at the Texas round, we were left a rider short in our team roster. After discussions with Chad it was agreed that he would be a great full-time addition to the team for the remainder of the season. We are excited to welcome him to the 1st Impressions Race Team.”

Five-time Progressive AFT race winner Cose said, “I’m really excited and grateful for the opportunity to race for the 1st Impressions Race Team. I have a great relationship with Eric, and I’m anxious to see what we can do together. I feel they have taken a step forward each year as a team, and I’m confident they will provide me with bikes capable of contending for race wins.

“I’m also looking forward to the challenge of racing the singles class. The class is ultra-competitive and full of young talent hungry to win. The whole team has already been super accommodating. It’s pedal to the floor to have us in a really good spot for the Kentucky mile doubleheader.”

Cose will make his 1st Impression Race Team debut at the Mission Red Mile Doubleheader presented by Indian Motorcycle of Lexington on May 28-29 in Lexington, Kentucky.