Eddie Tafoya Jr. Gets Eighth in Perris Before Rain Out Out at Eldora 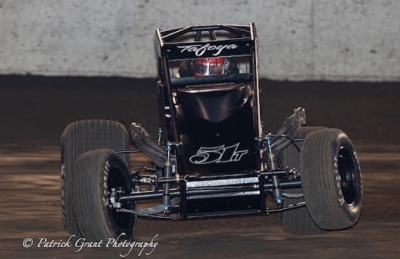 Last Saturday night after recording an eighth-place finish in the USAC/CRA Sprint Car Series main event at Perris Auto Speedway, Eddie Tafoya Jr., and the crew of his #51T sprint car high-tailed it out of town for two races at Ohio’s famous Eldora Speedway.  The event at the famous track was to be the annual “LETSRACETWO" and Tafoya’s first appearance with the USAC National Sprint Car Series in 2022. However, two days before the race, a nasty four-letter word intervened.  RAIN!

After the race at Perris, the #51T crew serviced the car, loaded up the hauler, and began the 2,188-mile journey to the track in Ohio.  However, an hour or two after they reached their destination, they got the dreaded call to let them know that persistent rain during the week had already saturated the facility and with more on the way for the weekend, the races were canceled.

“It is pretty frustrating not only for me, but dad spends a lot of money and his time getting out here,” Tafoya said from Indiana on Friday night.  “It is especially frustrating when we were getting ready to run a place like Eldora where everyone in the sprint car world wants to (race there).  It is pretty tough to come back here, get rained out, and have to turn around and come home.”

“USAC comes back to Eldora in September,” the handsome driver continued.  “Right now we are doing pretty good in CRA.  So, we kind of have to stick to that when we have races on the schedule and try to fit in some Indiana stuff around it.”

While the racing portion of the trip was a washout, it was not a total waste.  The team went shopping and bought some parts and had others serviced.  In addition, they dropped in to say “Hello” and chat with some sponsors.

“We picked up a new chassis, had a rear-end fixed, and got my shocks redone,” Tafoya said.  “So we are just kind of seeing some sponsors.  I went over to Bell and had my helmet worked on.  All kinds of stuff like that.  Just getting some things handled so we have our ducks in a row when we get home.”

On Saturday, the #51T hauler pointed west for its trip back to its Southern California base.   As soon as it gets back, the team will make some changes to the primary car to get it ready for next Saturday’s USAC/CRA race at Bakersfield.  In addition, they will start building a new car with the chassis they picked up in Indiana.

Before the visit to the Midwest, Tafoya, and the remainder of the USAC/CRA teams were greeted by gorgeous springtime weather at Perris, which is a half-hour from Tafoya’s home in Chino Hills, California.   A total of 24 USAC/CRA cars were in the pits for the race.  The first order of business was single-car qualifying and Tafoya toured the famous half-mile clay oval in a time of 16.847.  That was sixth fastest in the field and placed him on the inside of row three for the third 10-lap heat race where he finished sixth.

For the main, Tafoya started in the eighth position.  He stayed where he started for the first half of the 30-lapper, but by lap 20, he had dropped to 10th.  He was still there when the race hit the championship laps before a yellow flag flew with four to go.  By the time the race had ended, he passed two cars and ended up eighth.

The finish gave him four top 10s – including two in a row – in eight starts this year and it allowed him to stay eighth in the USAC/CRA standings.

If you or your company would like to be a part of the Specialty Fastener team’s 2022 season effort, please contact Eddie Tafoya Jr. via phone at (909) 393-3999 or by e-mail at This email address is being protected from spambots. You need JavaScript enabled to view it.. He will be happy to talk to you and layout the team’s 2022 plans.