Emerson Fittipaldi: Red Bull is superior now but Ferrari are still favorites for the World Championship 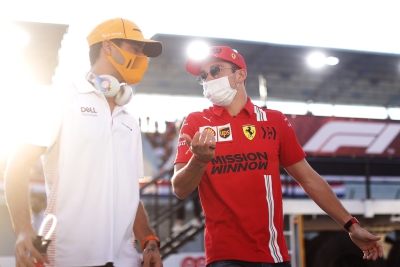 VegasInsider had a chat with two-time F1 world champion, Emerson Fittipaldi, about the Emilia Romagna Grand Prix where he commented on how Red Bull now look better than Ferrari but the latter are still favorites. Here's what he said:

"My forecast was going to be Ferrari to win but when I look at the sprint race and I was looking at the details, it seems to me that the Red Bull has, in my opinion, mechanical and aerodynamic improvement."

"They seem to be a little better than Ferrari. In mechanical, there's been an improvement. Downforce, because when the tires start wearing, you remember Max was very fast, that means he stays with the tires on a much better performance than the Ferraris."

"The Ferraris have an extremely fast engine. Ferrari to me, looking on TV, was porpoising. Was moving up and down a lot. The Ferraris still don't have the same downforce and mechanical grip as a Red Bull car."

"In my opinion, Red Bull is superior now. And that superiority of grip will give much better and consistent tires. They wear less tires than the Ferrari. And that will be very important during the year."

"I was very impressed by their braking, turning the car into the corner - the Red Bull was superior to the Ferrari, for sure."

"Ferrari was porpoising a lot. Moving up and down, on wet tires and dry tires - to my surprise. A little too much."

"They're (Ferrari) racing at home. If you think, Modena is half an hour from there. That's their home track. Italy, tremendous pressure - on the team, on the mechanics, the engineers, the team managers, the drivers. I can imagine that Ferrari was under what I call tremendous pressure for racing. Incredible."

“I think it was a mistake (LeClerc spinning) that anybody can do but being in Imola, being in Italy, being in the Ferrari team everybody, you know, makes a big thing about."

"If it was another track, same situation, another country, it was not going to be as big, the reaction of the media, the press, the team and the fans."

"Max and Checo Perez did a great job. They won the race on track. Well done."

"My opinion is still the same. Ferrari has a better chance of winning the Championship than Red Bull and we'll see what happens in the next few races."

"It's a shame what happened to Daniel Ricciardo at the start with Carlos Sainz."

"I think it was a racing incident. Possibly Carlos was a little bit more optimistic than Ricciardo, the way he was going outside, it happened."

Fittipaldi was speaking to VegasInsider, and you can find the entire interview here.