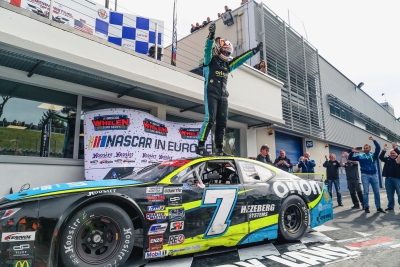 After winning the 2021 EuroNASCAR 2 Championship with Hendriks Motorsport, Martin Doubek and the Dutch powerhouse announced they renewed their partnership for the 2022 NASCAR Whelen Euro Series season. The Czech will not only defend his EuroNASCAR 2 title but also return to the EuroNASCAR PRO Championship. Doubek will continue to drive the #7 Orion Ford Mustang.

The 27-year-old is a true NWES veteran, who joined the series in 2015. Doubek raced in both championships between 2015 and 2020, joining Hendriks Motorsport for the first time in 2019. He won his first EuroNASCAR 2 race in 2020 and set his eyes on the big prize for 2021. Sharing the car with NWES Champion Loris Hezemans, the Litomysl-native won the title, bringing home the first major European championship of his career.

"I am extremely happy to announce that this year I will be competing in both the EuroNASCAR PRO and EuroNASCAR 2 championships in the #7 Orion Ford Mustang of the Hendriks Motorsport team,” said Doubek. “2022 will be my eighth year in the NASCAR Whelen Euro Series and this year I want to proudly defend my EuroNASCAR 2 title and go for repeating the feat of 2021 again.”

“By competing in both championships, I hope to actually achieve this expectation,” continued Doubek, who scored his first and only EuroNASCAR PRO Challenger Trophy win in 2020 at Vallelunga, Italy. “I'm also really looking forward to Rounds 7 and 8 of the championship, which will be held in my home country of the Czech Republic. I would like to show the Czech public what I can do by shining in front of my own home crowd".

With five wins and seven top-10s, Doubek’s contribution helped Hendriks Motorsport achieve an historic milestone: the #7 Mustang won both drivers championships and the Team Championship in 2021.

Teamboss Roy Hendriks said: “Hendriks Motorsport is obviously proud that Martin has chosen our team for the fourth consecutive year to compete in the NASCAR Whelen Euro Series. 2021 was a successful year for us together with the driver title for Martin in the EuroNASCAR 2 and the team championship with the #7 Orion Ford Mustang. We therefore look forward to working together again in the coming season and will support him as best we can so that he can compete for the title again."

The 2022 NWES season will kick off on April 9-10 at the Hockenheimring in Germany. The legendary track will make its comeback after a forced two-year hiatus. After the season opener, the official European NASCAR Series will visit five more European countries for point races: Spain, UK, Czech Republic, Belgium and Croatia. Italy will host a special All-Star Race, while in the winter between 2022 and 2023 there will be the first ever EuroNASCAR race on ice.