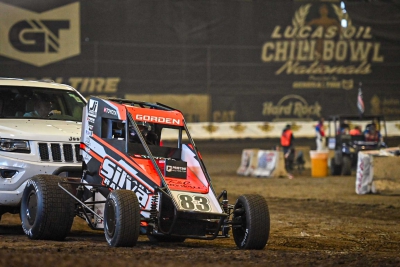 16-year-old Dominic Gorden of Clovis, Calif. made his mark on the Tulsa Expo Center during the 36th Chili Bowl Midget Nationals and 37th Tulsa Shootout. In just his fourth career full Midget start, Gorden raced in the C-Feature during Saturday’s competition on MAVTV with a seventh-place finish.

It capped a week of breakthrough performances for the driver of the No. 83 CB Industries/Gary Silva Ranches Spike powered by Toyota. Gorden competed in Wednesday’s qualifying night, finishing fourth in his heat race to advance to the qualifier. A run from tenth to fifth in the qualifier lined Gorden third in the second B-Feature. He advanced to the main event with an 18th starting position. Gorden moved forward six places to ultimately finish 12th.

The 12th place finish on Wednesday earned Gorden a tenth place starting position in Saturday’s C-Feature. He raced up to seventh, missing the transfer by just two positions in competition televised live on MAVTV.

He advanced four positions in the Stock A-Class feature for a 16th place Tulsa Shootout finish. His standout performance took place in the Outlaw Non-Wing feature where he moved from 11th to eighth at the finish.

The 2022 season for Dominic Gorden begins in February with USAC National Midget competition at Bubba Raceway Park in Ocala, Florida. Gorden will compete for the Xtreme Outlaw Series Midget championship for Chad Boat Industries while competing in numerous USAC and POWRi National Midget races as well.

For more information on Dominic Gorden, follow him on social media!