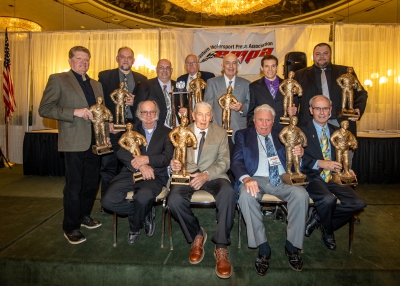 The three day affair is highlighted by a Saturday evening awards dinner that includes inductees into the prestigious EMPA Hall of Fame as well as a number of other special awards that are bestowed to the organization’s membership.

At 77 Commander is just as energetic today as when he began taking care of promoting Lebanon Valley Speedway 60 years ago. He’s made speedway success look easy, surrounding himself with quality officials while regularly improving the track experience for fans and teams. His effort, dedication, and willingness to apply his own resources for the benefit of racers, fans, and the sport in general have never wavered.

Frey served as an announcer for the National Hot Rod Association for 46 years (1966-2012) and during that time he brought with him a new level of excitement and knowledge that served the sport and business of Drag Racing very well.

Acting on the advice of older brother Dub, May moved from his El Paso, Texas home to Pennsylvania 50 years ago to pursue a career as a full-time Sprint Car racer. His skill behind the wheel is highly regarded. Many of his on-track achievements are legendary, like the time he balanced a Sprinter on its right front and rear wheels, since the left front had come off, in order to qualify for a feature.

Second generation racer, Kreitz, Jr., did it his way as a driver/owner earning 200 Sprint Car wins including the 1986 $50,000 Kings Royal at Eldora Speedway. His list of accomplishments are impressive including track titles at Selinsgrove (’85 and ’86), Williams Grove (’90, ’91, ’92, ’93), Susquehanna (’92 and ’03) and the 1992 Central PA Overall title. He amassed wins in eight states including 10 World of Outlaw A-Mains, two WoO Preliminary features and eight All Star Circuit of Champions main events.

Rossell was a pioneer race driver and builder of stock cars. He began is successful career in 1958 with just a Chevy and an engine. A few years later he’d find himself at the top of the list with the big names in the class. He was talented on both dirt and asphalt and was a member of the All Star League from 1967-71, tallying nearly 50 wins including two Wall Stadium 300 lappers as his biggest victories.

Other top honors were the Jim Hunter Memorial EMPA Writer of the Year which went to Herb Anastor and Pete MacDonald who was named the Ace Lane Sr., Memorial Photographer of the Year.

The John Blewett III Young Gun Award presented by Sunoco Race Fuels went to Briggs Danner. Andy Jankowiak was presented the Chris Economaki Memorial News Maker of the Year. Brett Deyo and his Short Track Super Series picked up the EMPA Promotional Effort for the Year for the second time in the past three years. Legendary car owner Ken Brenn Sr., was the named as the Junie Dunleavy Memorial Spirit of the Sport Award. The Ernie and Marilyn Saxton EMPA Service Appreciation award was bestowed to Joe Kaminski.

The World Racing Group Jerry Reigle Memorial Award, which is presented each year to an individual in Sprint Car Racing who best exemplifies what the late Reigle stood for, was awarded to a very humbled Steve Post.

Friday night of the convention a Racers Salute was hosted with a number of regional and area drivers on hand for interviews and networking with the media.

On Saturday morning press conferences took place with several race tracks and race groups speaking on behalf of each of their 2022 upcoming seasons. At the same time the Brice’s NAPA Auto Parts Photo Contest was taking place.

Scott Walsh, sports writer from the Scranton Times, was the keynote speaker and also joined Karl Fredrickson of Speedway Illustrated and Bob Frey afterwards for a forum discussion of the media and where it stands in 2022.

Founded in 1969 EMPA is an organization of professional writers, broadcasters, announcers, videographers, photographers and PR individuals working in the motorsports and unified in representing auto racing in the utmost proficient manner.