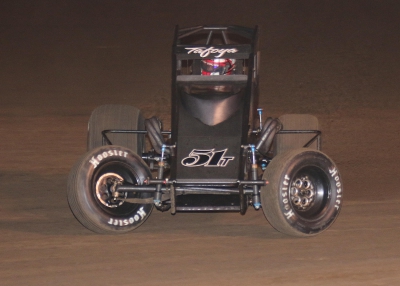 Eddie Tafoya Jr. concluded a successful 2021 sprint car season by racing in the “54th Annual Western World Championship” at the Arizona Speedway in November. Despite missing four races during the year, the handsome driver ended up eighth in the USAC/CRA Sprint Car Series championship standings.

Tafoya qualified well each night on the 3/8 mile “Copper State” track. On Friday he was eighth fastest in his flight with a time of 15.170. On night number two, he went two spots better to sixth with a lap of 15.049.

After his qualifying effort on Friday, “Mr. Smooth” placed sixth in his heat forcing him to the B main event. A fifth-place finish in the B sent him to the A main where he started 19th. Racing against the best cars and drivers in the USAC/CRA and USAC National Series, he passed seven of his competitors to finish 12th.

The Saturday finale for the “Western World” would mark Tafoya’s last ever event at the track as it was closing for good at the end of the season. In his 10-lap heat race, he brought the beautiful #51T home third and that put him into the starting field for the final race of the 2021 season. Not only did it put him in the main, but it also locked up the eighth-place finish in the championship standings.

For the main, the Chino Hills, California resident started inside the seventh row in the 13th spot. The fast way around the track was on the wider line and Tafoya got trapped on the bottom. When all was said and done, he ended up 21st.

To get to his impressive eighth-place finish during his sophomore season in the tough USAC/CRA Series, Tafoya contested 17 of the 21 races on the schedule. Of the 17, he made the A main event 15 times. He had one top three finish, five top fives and he was in the top 10 six times.

In addition to being on the track for nearly all of the USAC/CRA races, he took advantage of breaks in the schedule to hone his skills by heading back to Indiana three times during the year. In the “Hoosier State,” he raced 12 times, on seven different tracks against the best traditional sprint car drivers on the planet.

While the 2021 season has just ended, an early start to the 2022 campaign is just around the corner. To be exact, the first three nights of the new campaign are only seven weeks away! They will be at the Cocopah Speedway in Yuma, Arizona on January 27, 28 and 29. Tafoya and the team will be primed and ready for the new campaign and have their sights aimed on what is destined to be the young driver’s best season to date in a 410-sprint car.

If you or your company would like to be a part of the Specialty Fastener team’s 2022 season effort, please contact Eddie Tafoya Jr. via phone at (909) 393-3999 or by E-mail at This email address is being protected from spambots. You need JavaScript enabled to view it.. He will be happy to talk to you and lay out the team’s 2022 plans.