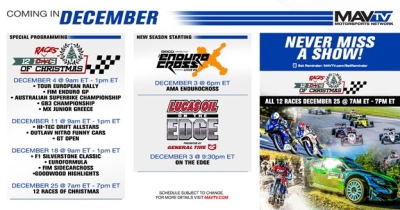 MAVTV Motorsports Network is back this month with another exciting lineup for automotive enthusiasts. Subscribers will get to witness new season premieres, special broadcasting and the 12 Races of Christmas event. Kicking off the month with two season premieres starting Friday, December 3, The AMA Endurocross will begin at 6 p.m. Eastern time - featuring one of the wildest sports on two wheels. The extreme, off-road series combines motocross with the challenging obstacles of an enduro, all packed into the tight confines of a fan-friendly stadium. Following that, a new season of On the Edge will premiere at 9:30 p.m. Eastern time. This edgy, exciting program will expose viewers to a multitude of different motorsports - from Motorcycle Flat Track racing and Midget racing to Swamp Buggy Racing and Team Demolition Derby.

On Saturday, December 4, the motorsports network will start the 12 Races of Christmas special with five never before seen races from all across the globe. The Tour European Rally, FIM Enduro GP, Australian Superbike Championship, GB3 Championship and MX Junior Greece will be broadcasted back-to-back from 9 a.m. - 1 p.m. Eastern time.

“We are very excited to present our viewers with the 12 Races of Christmas event - featuring 12 never seen before races, from all over the world,” said John Duff, Head of Content - MAVTV Motorsports Network. “Our gift to you and yours, all the adrenaline filled action that one box can hold! Put your seat belts on, grab your racing loved ones, and tune it! You won’t want to miss this one.”

Week two will be underway Saturday, December 11 with three more back-to-back races to continue the Christmas special. Starting off at 9 a.m. Eastern time with Hi-Tec Drift Allstars - Australia’s unique and innovative take on drifting. Immediately followed by Outlaw Nitro Funny Cars which will feature the USA vs Australia Challenge. Closing out week two will be the GT Open.

12 Races of Christmas resumes with week three on Saturday, December 18 at 9 a.m. Eastern time with the F1 Silverstone Classic, followed by the EuroFormula and the FIM Sidecarcross - where subscribers will watch a driver and passenger work together to race as one. Finishing off with the Goodwood Speedweek Highlights - dynamically showcasing the motoring and motorsport heaven that all motoring fans have missed greatly during 2020.

The final week of December will feature the entire 12 Races of Christmas special, with each race from weeks one through three playing back-to-back. The event will air on Christmas Day, December 25 from 7 a.m. Eastern time to 7 p.m.

MAVTV is now available to more viewers than ever before. With a total of 220 providers across cable, satellite, telco and digital broadcast platforms - including AT&T U-verse, Charter/Spectrum, DIRECTV, Fios by Verizon, FuboTV, YouTube TV, Mediacom and many more. The country’s premier motorsports network is seen in more than 30-million households.

Race fans who don’t have MAVTV Motorsports Network should contact their local cable, satellite, or other subscription service provider to get details on how to add it to their channel lineup. A full list of providers, shows and scheduled broadcasts can be found by visiting www.MAVTV.com.

The full monthly broadcast schedule is available at https://www.mavtv.com/schedule/.

Rate this item
(0 votes)
Tweet
« Drydene Xtreme DIRTcar Series Debuts at I-75 Raceway This Saturday The Next Chapter: Long Looks Ahead, Not Back »