14-Year-Old Girl Takes on the Fastest Cars on Pavement 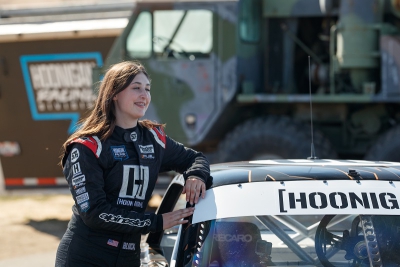 Hoonigan and Ken Block are back with season 2 of Hoonicorn Vs. The World, their wildly popular YouTube series with more than 47-million views in its first season. There’s a dramatic twist in season two, however - with an entirely new “Block” behind the wheel. For the first time ever, Head Hoonigan in Charge, Ken Block is handing over the keys to his fire-breathing 1,400HP, methanol-fed twin-turbo, all-wheel-drive Ford Mustang Hoonicorn to another driver: his 14-year-old daughter, Lia Block.

Episode 1 of the series’ second season launches today on the Hoonigan YouTube channel, featuring Lia and the Hoonicorn taking on a 4,000HP Pro Stock Corvette drag racer piloted by NHRA driver Alex Laughlin. Each week, Lia Block will take on a new challenger in a best of three no-prep drag race format, ranging from this full Pro Stock NHRA dragster, to one of the world’s fastest R35 GTRs, a Tesla Model S Plaid, and nearly everything in between. Taking lessons from season 1 of the show, the Hoonigans lined up some of the fastest and most interesting cars to race against the impossibly-fast Hoonicorn.

“I’ve been around my dad’s racecars for as long as I can remember obviously, and I have always wanted to know what it’s like to drive one. I learned how to do donuts in his ’78 Ford Escort Mk2 in a parking lot last year, but the Hoonicorn is a pretty big step up from that!!” joked Lia Block. “Since then, I have been doing a ton of kart racing, raced my first rally race, podium'd in the Nitro Rallycross race in a Sierra Car, and training with awesome drivers like NHRA Top Fuel dragster driver Leah Pruett to help me get ready for the craziest car my dad has ever driven: the Hoonicorn. It was such a crazy experience. I absolutely love driving that car!!”

The Hoonicorn has also received a set of key updates, mainly based around safety: a reinforced roll cage with intrusion bars on the doors, a paddle shift system (allowing for the Lia to keep both hands on the wheel at all times), and a full halo seat to protect the driver in case of any impact. A set of American Racing VF503 wheels were installed (with new tire bead gripping tech), in addition to an all-new livery from Death Spray Custom - a tribute to the Hoonicorn’s original look from its launch in 2014.

“With the excitement from the fans on Hoonicorn Vs. The World season one, we knew it had to come back! I hadn’t planned to race the Hoonicorn again since my contract with Ford expired at the end of 2020, but at the same time Lia was taking a very serious interest in racing – so, the stars just aligned to make this opportunity happen. So, we got to keep a Block in the Hoonicorn, just a different Block!” said Ken Block. “Seeing Lia’s natural talent and progress behind the wheel has been a surreal experience for me. To say this is a proud-dad moment would be a major understatement! The Hoonicorn is one of the wildest and gnarliest cars I’ve ever driven, and I would never have put my young, teenage daughter behind the wheel if I didn’t have the confidence that she could handle it. And, she handled it like a champ! After watching her bruise some egos whilst shooting season 2 of Hoonicorn Vs. The World, I couldn’t be more stoked with her level of talent and car control – at a mere 14 years old!!”

Additionally, the 1,400 horsepower Ford Mustang RTR Hoonicorn V2 will be one of the fastest new high-end vehicles in Zynga’s popular mobile drag racing game, CSR Racing 2 (CSR2). Now everyone with a smartphone will be able to virtually hop into the Ford Mustang RTR Hoonicorn V2 and race against icons like the SSC Tuatara, Weaver Customs’ Twisted Mistress, and more. As a special highlight of the in-game event, players will be able to get racing tips by following Ken as he teaches Lia to drag race.

Season one saw the Hoonigan crew pitting the Hoonicorn against a wide variety of unique vehicles from a Trophy Truck, McLaren, and even Old Smokey (Diesel Truck). The project was conceptualized on what people were doing with the Hoonicorn in a video game, and bringing it to life to show people how fast the Hoonicorn was against the variety of selected vehicles. In season two, this quest continues as the internet’s most iconic car, piloted by the automotive world’s youngest female prodigy, takes on a new crop of the world’s most powerful challengers in a no-prep drag race format.

With over 47 million views and counting, Hoonicorn Vs. The World is an unprecedented YouTube series success. With new cars, new surprises, and even a new Block, Hoonigan is definitely kicking it up a notch for season two.