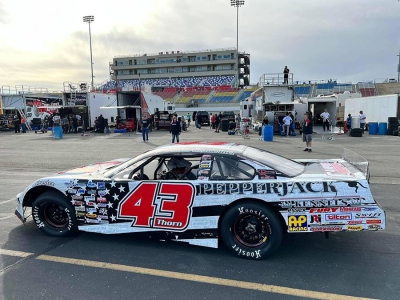 Activities for PepperJack Kennels at Five Flags will begin on Wednesday December 1 with the WEAR Green Flag Party presented by PepperJack Kennels. PJK will present the live music during the night which features the draw for the all-important Snowball Derby qualifying order.

Bakersfield, California’s Derek Thorn will drive the No. 43 PepperJack Kennels Toyota in both the Snowflake 100 and Snowball Derby. The 2021 SPEARS SRL Southwest Tour champion drives for Byron and Carol Campbell of Campbell Motorsports. The 2019 Snowflake 100 winner is searching for his first Snowball triumph after back-to-back pole positions in 2019 and 2020.

Race fans can learn more about PepperJack Kennels, their services, and their world-class facilities in Woodville, Wisc. and Ravenna, Texas by visiting www.PepperJackKennels.com/Snowball