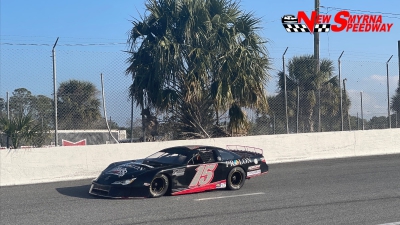 After a great 5th place finish in the ARCA West Series final in Phoenix last Saturday, Jean-Philippe Bergeron will now head to New Smyrna Speedway to compete in the 56th Florida Governor’s Cup behind the wheel of the Pro Late Model #15 owned by Race Car Solutions. Jean-Philippe finished 5th in the World Series of Asphalt standings last February on the ½ mile oval with the same team. Race Car Solutions (RCS) is a well-established team in Florida that specializes in advanced car preparation and driver development. So Jean-Philippe, who goes by the nickname “Bergy,” will find himself in familiar territory on Saturday for this annual race that brings together the best Pro Late Model and Super Late Model drivers in the southern United States. “I know that RCS is putting together some high-performance cars that can run up front. I’m looking forward to racing with them again. I will finish my racing season at the same place I started it at the beginning of the year!” said the driver who would like to do a full season in the ARCA series in 2022. “Nothing is decided yet. We are thinking about it and obviously looking for financial partners that would allow us to confirm a full season in the ARCA series. The Festidrag development partners are delighted with the performances that Jean-Philippe has accomplished in the last few months. He has shown great maturity, adaptability and talent,” added Martin D’Anjou, CEO of Festidrag Développement.

The green flag for the race program will be given on Saturday at 7:00 pm. The 50-lap event has 15 drivers registered to date, including Michael Lira, who was Jean-Philippe’s spotter at the World Series of Asphalt earlier this year. The RCS teammate will change roles on Saturday and will be back behind the wheel of the #5 car after a 4-year absence. Fans of Jean-Philippe Bergeron are invited to follow Festidrag’s Facebook page (www.facebook.com/festidrag) for all the details of the event.