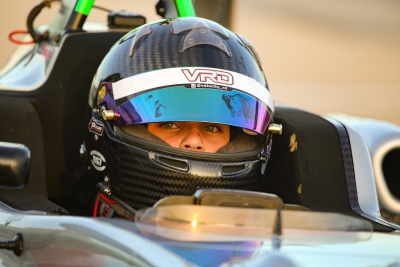 Yesid Pamplona
After the recent announcement regarding the launch of USF Juniors Presented by Cooper Tires by Andersen Promotions Owner and CEO Dan Andersen and Series Manager Gustavo Yacaman, VRD Racing have inked a deal for 2022 with Nikita Johnson to continue their ever-growing relationship.
USF Juniors serves as a pre-step to the highly acclaimed Road to Indy Presented by Cooper Tires offering its champion a scholarship of over $200,000 to advance to the first level – the Cooper Tires USF2000 Championship.
Johnson will embark on a winter test program which will see him at Barber, Sebring and Homestead in December followed by the YACademy Winter Series in early February.
“We are stoked to have Nikita graduate from our academy,” said Team Owner Daniel Mitchell. “He has been an integral part of our academy from the very beginning. USF Juniors gives us the opportunity to graduate him early and he is more than ready to do so!”
Johnson picked up his first win of his formula career back in March of this year at the second running of the YACademy Winter Series taking victory in Race 2 at Homestead-Miami Speedway. But, due to age restrictions, he had to take a back seat and patiently wait his turn.  He kept busy racing in US Legends cars with Joe Ryan out of Mooresville, N.C., and recently made an appearance at the SKUSA Pro Tour SummerNats.
“USF Juniors is the perfect opportunity for us to get Nikita out racing,” Mitchell continued. “At such a young age it’s going to be tough, but Nikita has demonstrated the maturity and race craft that it takes to get the job done in his rookie season. Nikita’s training and seat time in the VRD Academy will prove vital. He has been an integral part of the team not only on-track testing with the team during the 2021 season, but he’s been around the ever-successful race team to experience the ups and downs of a full race season.”
Johnson, 13, from Gulfport, Fla., brings with him some big names to sponsor the side of his USF Juniors machinery including Tiger Precision Products, an engineering and production facility located in Mooresville that designs high-end carbon fiber and machining products, and PSA Check, a prostate cancer charity, which is a designated IRS 501(c)3.
‘I’m super happy to join VRD,” said Johnson. “Their results prove they are the best in the business. My sponsors and I did our homework when we first joined the VRD Academy. We knew VRD was the best team and I think this was before they had even won a race. I want to thank my first two sponsors Tiger Precision Products and PSA Check for supporting me and really can’t wait for the first race of the season in 2022!”
VRD Racing, based out of Atlanta Motorsports Park in Dawsonville, Ga., are freshly back from a dominant final weekend at COTA in front of a record F1 crowd. For more information on how to get involved in a VRD Academy training program, please contact team owner Dan Mitchell at This email address is being protected from spambots. You need JavaScript enabled to view it..
Rate this item
(0 votes)
Tweet
« North America Drivers Take Home Three Lamborghini Super Trofeo World Titles Indian Motorcycle, America’s First Motorcycle Company, announces 2022 model year lineup »