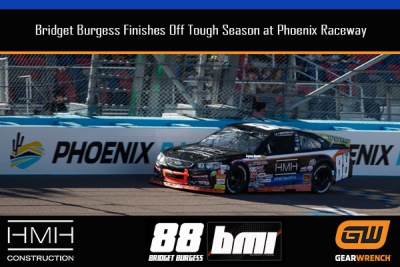 Bridget Burgess and BMI Racing loaded up the HMH Construction Chevrolet SS for the last time in 2021 and headed to Phoenix Raceway for the final race of the ARCA Menards West Series. The ARCA West race is a part of NASCAR’s Championship Weekend and held in conjunction with NASCAR Camping World Truck Series, NASCAR Xfinity Series and NASCAR Cup Series.

The day started early with the team entering the track at 5:30am, unloading the race car and heading straight to the tech inspection area. The practice/qualifying session started mid-morning and Bridget got straight to it. The series had brought a different compound tire to this round and for many of the west teams, it was the first time using them. At the end of the session, Bridget qualified 26th out of 34 cars.

The green flag waived signaling the start of the Arizona Lottery 100, and the field roared across the start/finish line. Bridget put in a solid effort throughout the race, avoiding trouble and making gains where she could, ultimately finishing the race in 24th.

The 2021 season delivered mixed results for Bridget and her HMH Construction Chevrolet SS, with top highlighting moments from Sonoma Raceway and Portland Raceway driving her way up into the top 5, to heartbreaking moments being on the receiving end of rough driving, as well as component failures.

Unlike many of the teams that Bridget competes against, BMI Racing has just one car for the season, that is primarily more suited to road course racing. Bridget along with her dad Adam Burgess, mom Sarah Burgess, as well as close friends Victor Franco and Samantha Penny sacrificed many hours in the race shop either making repairs to the car or switching it from an oval setup to a road course setup. Bridget wraps up the season as the only female driver to complete a full ARCA Menards series schedule and with two Top 10 finishes, and 9th in the ARCA Menards West Series Championship points standing.

A replay of the Arizona Lottery 100 will broadcast on NBCSN on Thursday, Nov. 11, starting at 5 p.m. ET.