JP Bergeron return to the seat of the No.46 Fusion 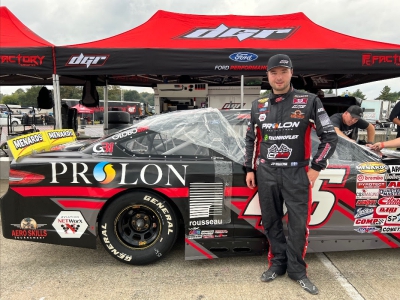 It has been three weeks since Jean-Philippe Bergeron finished eighth at Salem, Indiana in his first ever ARCA Menards Series race. He started 7th and managed to climb back up to 4th place, but bad adjustments to the car prevented him from continuing his climb. He still managed a top 10 finish in his first career start, much to the delight of the driver, his team and sponsors.

He will return to the No. 46 David Gilliland Racing team on Saturday, October 23, for his second career start in the series, this time at Kansas Speedway in the Reese’s 150 (100 laps, 150 miles). Last May at the same track, crew chief Derek Smith guided Thad Moffitt and the No. 46 team to a sixth-place finish.

“Now that I’ve familiarized myself with the car and the team earlier this month, my next challenge will be to run on a 1.5-mile track for the first time. I’m used to driving on short tracks. This will be another step in my learning process”, said the driver from Quebec, Canada. He will have the chance to perform in front of his family, who have traveled to the United States for the occasion. “It is a source of pride to see our son racing alongside talented drivers such as Ty Gibbs and Corey Heim. This is the best school to learn, in my opinion. Ride with the best and you will become better,” says proudly Marc Bergeron, Jean-Philippe’s father who will attend the race with his wife and their two daughters. Martin Perreault and his wife Christiane Mercier of Circuit Téléguidés Saint-Roch, one of the worthy partners of Jean-Philippe’s stock car career, will also be present.

Jean-Philippe Bergeron will finish his three-race series in 2021 in the ARCA Menards in Phoenix on November 6th for the season finale.