Force dominates Friday at the FallNationals 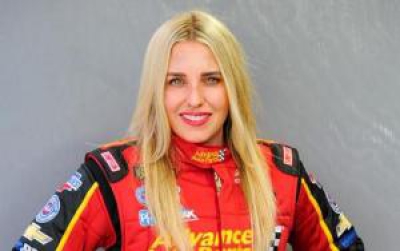 Brittany Force made the quickest run in track history at Bristol Dragway on Friday, powering to the provisional No. 1 spot in Top Fuel at the NHRA Thunder Valley Nationals.
Tim Wilkerson (Funny Car) and Matt Smith (Pro Stock Motorcycle) are also the provisional No. 1 qualifiers at the 18th of 20 races during the 2021 NHRA Camping World Drag Racing Series season and the fifth race in the Countdown to the Championship playoffs.
Force blistered the track record at Thunder Valley with an impressive run of 3.682-seconds at 328.94 mph in her 11,000-horsepower Flav-R-Pac dragster, sending her back to the No. 1 spot. If it holds, it would give the former world champ an incredible 12 No. 1 qualifiers this season and 10 in the last 11 races. She entered the weekend 52 points back of points leader Steve Torrence and Friday was the start of what Force hopes is a big weekend.
“Twelve No. 1 qualifiers is an accomplishment for our entire team,” said Force, who is after her 32nd career No. 1 qualifier. “That’s huge and it’s hard work from every one of our guys. It’s not easy to pull that off and we’ve done a good job at it, and now our focus is hopefully on two rounds on Saturday and then raceday. Our mindset is we’re excited. We’re in the hunt for this championship and we’re going to fight for it. This team is an incredible group and I’m lucky to have them.”
In Funny Car, Tim Wilkerson drove to the No. 1 spot in his 11,000-horsepower Levi, Ray & Shop Ford Shelby Mustang with a pass of 3.965-seconds at 295.27 mph. If it holds, it would give Wilkerson his first No. 1 qualifier since 2019 and 21st in his career as he tries to finish his 2021 season on a good note. Wilkerson has one victory during the Countdown to the Championship this year and is after a second with three Funny Car races remaining. Robert Hight is currently second after going 3.968 at 323.50, while his teammate, John Force, is right behind with an identical 3.968 at a slower 322.73.
Picking up right where he left off in Dallas, Pro Stock Motorcycle went to the top on his Denso Auto Parts/Stockseth/Matt Smith Racing EBR with a run of 6.900 at 197.51. This weekend marks the first official race for the class at Thunder Valley and Smith, the defending world champ and current points leader, made a strong first impression. If it holds, it would be the fourth No. 1 qualifier for Smith this season and 47th in his career.
After a slow start in the Countdown to the Championship, Smith is back to his usual impressive form, winning in Dallas and putting together a strong run in Bristol to open the weekend. It is the fourth of six playoff races in the class and Smith had an eight-point lead on Steve Johnson entering the weekend.
Chris Bostick is currently second after going 6.927 at 193.27, while Johnson is currently third with a solid pass of 6.942 at 193.60.
(Courtesy of NHRA Communications)
Rate this item
(0 votes)
Tweet