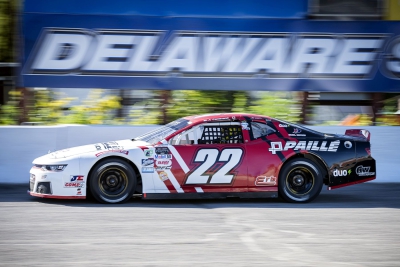 Marc-Antoine Camirand had an intense weekend, as he was at Delaware Speedway, near London, ON, for three races scheduled on Friday and Sunday for the end of the season in the NASCAR Pinty’s. The driver of the GM Paillé n°22 Chevrolet Camaro didn’t achieve the results he had hoped for, as he experienced some fierce racing throughout the weekend,

On Friday night, for the first of three races scheduled on the half-mile oval, Camirand was hoping for a strong result to jump-start the weekend. Although he qualified in 12th place, he was hoping to come back strong in the race.

Unfortunately, he just didn’t have time to do so. He was taken out of the race in the opening laps when a competitor spun and caused a multiple-car accident. The driver of the GM Paillé n°22 Chevrolet Camaro had nowhere to go and couldn’t avoid the collision.

“My GM Paillé n°22 Chevrolet Camaro sustained some damage during the accident and was forced to retire from the Canadian Tire 125 after completing only five laps. This was definitely not the way I wanted to start the weekend,” he explained.

The NASCAR Pinty’s series was in action again on Sunday for a double-header. Camirand had a strong qualifying, starting fifth on the grid. The driver of the GM Paillé n°22 Chevrolet Camaro had a quick pace throughout the race.

Camirand had just moved up to third place when a late-race caution happened. Fourth at the restart as the order was determined by the last completed lap, he was hit roughly from behind by another car. Both drivers dropped many positions after the collision and then continued to fight fiercely, before Camirand’s rival hit the wall in turn 1.

During the caution lap following the accident, Camirand drove outside the regular path while passing towards his competitor. He received a penalty as this was considered like unsporting behavior by NASCAR officials.

“I don’t know why he was out of his car, but still, I shouldn’t have made that move. However, I had absolutely no intention to intimidate him, even less make a dangerous move towards him,” stated Camirand, who scored a 10th-place finish in the Quickwick 125. He didn’t take the start of the third race of the weekend, the Pinty’s Fall Brawl, due to the penalty.

“This definitely is not the season finale I was hoping for. It has been a difficult season overall, but at least we had a nearly perfect weekend at the Canadian Tire Motorsport Park which has been a very great moment in a harsh season. I couldn’t thank my partner GM Paillé enough for their support even if we didn’t get the championship results that we had aimed at. They are everything I could wish for a partner,” Camirand concluded.