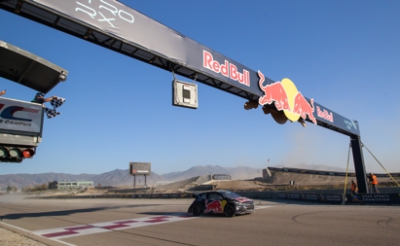 Hansen advanced to the high stakes Supercar final, where he had to face off against Rallycross’ heavy-hitters, including Travis Pastrana, Tanner Foust and Scott Speed. The competition was fierce, and three cars – Foust’s, Andreas Bakkerud’s and Oliver Eriksson’s – were unable to finish. Hansen had to overcome technical challenges of his own as well: an oil issue earlier in the day nearly took him out of action. But Hansen kept his cool under pressure and piloted his Red Bull Peugeot 208 NRX to win by nearly six seconds.

Hansen reclaimed his Nitro RX crown, having won its 2018 debut as a one-off race. This also was a double podium for the Hansen family: Timmy’s brother Kevin (SWE), himself a Nitro RX winner in 2019, took third place in his own Red Bull Peugeot 208 NRX. Steve Arpin (CAN) placed second in his HempFusion Hyundai i20.

“It was just unreal, I love this racetrack,” Timmy Hansen said afterwards. “It’s been such a great event… I’m so happy right now.” Arpin added, , “That is the most amazing race that I’ve ever been a part of.”

Timmy and Kevin Hansen had ties to the NRX Next field as well. George Megennis (USA) won in the second of two NRX Next rounds driving for the brothers’ #YellowSquad team. Megennis bested Martin Enlund (SWE) and Caspoer Jansson (SWE), both of whom made the podium in Friday’s NRX

NRX Next Final (Round Two):

Next on the Nitro RX itinerary is ERX Motor Park near Minneapolis, Minnesota next weekend on October 2 and 3. Timmy Hansen and George Megennis will look to build on their early momentum, while Pastrana, Foust, Speed and the rest of the Supercar field, look to shake off today’s results and get back on the podium.

Tickets for Nitro Rallycross can be purchased at https://www.nitrorallycross.com/calendar