Sini and Loibnegger in great form at Grobnik 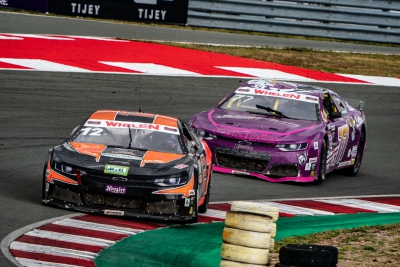 The first Top5 of the season has arrived for Francesco Sini in Croatia, at the end of a tricky weekend. Sini conquered a solid fifth position in the fourth NASCAR Whelen Euro Series event of the 2021 season. In the EuroNASCAR 2 Division Alina Loibnegger conquered the lead of the Lady Trophy ranking, while Pierluigi Veronesi had a really though weekend but he was able to end very close to the Top10.

After having showed several times during the season a very competitive potential, Francesco Sini has been able to achieve the full performance status of his Camaro in the second race of the weekend, thanks to a full attack race since the start. Tenth on the starting grid, the Pescara native driver took advantage of a - finally - clean race with neither contacts or technical issues, to climb position after position with grit and determination, ending under the checkered flag in sixth position. The already good result was improved after the race, due a penalty given to another driver. The first Top5 of the season for the Italian driver in the very competitive field of EuroNASCAR PRO division arrived at the end of a challenging weekend, where the #12 Camaro prepared by the Solaris Motorsport’s mechanics has improved its lap times session by session.

In the EuroNASCAR 2 Division was Alina Loibnegger to take the maximum  advantage from the weekend. The young Austrian driver took two Lady Cup wins in a really challenging racetrack and, thanks to these results, she took also the lead in the female special standings, when only two events missing at the end of the season.

Really troubled weekend for Pierluigi Veronesi who, after a very difficult qualifying session, was forced for a stop in the Saturday race. The driver of the  #27 Mustang by Double V Racing found a partial revenge  in the Sunday Race 2, ending the race really close to the Top10.

October the 9th and 10th will mark the end of the EuroNASCAR regular season on the historic Zolder Circuit, prologue of the 2021 Finals hosted in Vallelunga at the end of October with double points races.