Max Lanza lengthens in the championship in Grobnik 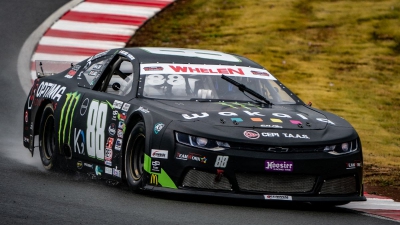 In Croatia Max Lanza got the best from a very difficult weekend to lengthens his leadership in the Legend Trophy, conquering two podium places for the class standings and a solid overall Top10 overall in Saturday Race 1.

The Grobnik Autodrom definitely does not bring good vibes to Max Lanza: last year here he was forced to quit prematurely his racing season after an huge crash. This time the bad luck has taken the form of cervical contractures, with dizziness and nausea, that badged the Rome native driver all the weekend long. A real pity, because in Croatia Lanza showed a really competitive pace, conquering the overall 8th position on the grid in qualifying.

This result could have been even better: "We were really fast here in Croatia, but nothing turned the right way. In qualifying we suffered for a puncture and, when we realised it, it was too late to have a chance to get the good lap time for a top position on the grid. We could have aimed for the second row. To make things worse, this sickness arrived and badged me in each session." commented Lanza, who didn't give up and grabbed a second and a third place, crucial for the Legend Trophy standings. "In Race 1 we were really competitive and we achieved a really good Top10 spot in challenging conditions. Race 2 has been even more complicated for me, but I didn't want to give up. I've been thinking about the championship and it confirmed  to be the right decision: we leave Grobnik with a strengthened leadership in the Legend Trophy!"

After four rounds, Lanza leads firmly the Legend Trophy standings and he is just two points far from the overall Top10. Next NASCAR Whelen Euro Series round is scheduled for October 9 and 10 at Zolder Circuit, Belgium. The weekend will close the regular season before entering the 2021 EuroNASCAR Finals, hosted by Vallelunga racetrack, that will bringall the show of the last two double points races.