Loris Hezemans scores fourth win of the season at Grobnik 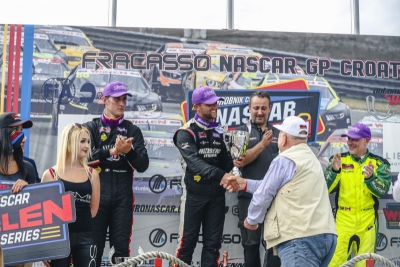 After 17 exciting laps of the EuroNASCAR PRO Round 7 at the Automotodrom Grobnik, it was the second driver to cross the finish line who won the race. A penalty for Gianmarco Ercoli due a start infringement made Loris Hezemans the winner. The Dutchman scored his fourth win of the season and expanded his NASCAR Whelen Euro Series championship lead. His teammate Vittorio Ghirelli ended up second, while former Formula One Champion Jacques Villeneuve stood on the podium for the first time in 2021.

Hezemans started from Pole Position but had to surrender the lead to Ercoli in the first corner. In 2021, drivers have to drive through the grid markers at the start, but Ercoli stood too close to Hezemans before crossing the start-finish line and was therefore handed a 10-second penalty added to his total race time. Hezemans spent most of the race on the tail of the CAAL Racing Mustang without finding a way past the Italian. When the penalty was notified to Ercoli, Hezemans did not take any risk, survived a late restart and won the race.

“I still wanted to pass him fair and clean but it’s quite hard when you get pushed into the grass every time you’re next to him”, said Hezemans, who celebrated his 11th EuroNASCAR PRO win. “There is not much of an option you can use. He likes to complain but for me it’s no problem. In the end it was very good and I was very happy with the car. I’m also happy with the results we are getting in event after event. So far it has been a very good season but it’s going to be close as I’m going to miss Zolder. The reasons for this will be announced soon but I can tell you it’s great stuff coming up.”

Ghirelli ended up second behind his teammate. The Italian, who scored his maiden EuroNASCAR PRO win at Most, is still the fiercest rival of Hezemans with a 23 point deficit from the Championship leader. The Hendriks Motorsport driver bested a strong Villeneuve, who scored his fifth career podium finish in EuroNASCAR and the first for Academy Motorsport / Alex Caffi Motorsport. Speedhouse’s Lucas Lasserre, who started seventh, battled his way through the field to finish fourth under the checkered flag, while Alon Day rounded out the top-5 at the wheel of his #54 CAAL Racing Chevrolet Camaro. The Isreali dropped to seventh in the early stages but climbed his way back up the ranks during the race.

NWES returnee Romain Iannetta came from tenth on the grid onto sixth place. The Marko Stipp Motorsport driver from France had a strong run at the wheel of the #46 Chervolet Camaro. The DF1 Racing duo consisting of Nicolo Rocca and Marc Goossens followed in seventh and eighth. RDV Competition’s Ulysse Delsaux ended up ninth and topped the Junior Trophy classification. Ercoli closed the top-10 after the penalty and was second in the Junior Trophy standings.


EuroNASCAR PRO debutant Leonardo Colavita rounded out the special classification’s podium. With an age of 16 years, he’s the youngest driver on the grid. The Club Motorsport’s Fabrizio Armetta won the race in the Challenger Trophy ahead of Yevgen Sokolobskiy and the special classification’s points leader Henri Tuomaala. Giorgio Maggi ended up 18th after a disastrous race: The Swiss was battling for a spot on the podium, when a technical issue on the restart – the caution was triggered by two Not Only Motorsport cars in the gravel – on lap 13 threw him down the order.

While EuroNASCAR PRO will return to action on Sunday at 2:45 pm CEST, while EuroNASCAR 2 Round 7 will start at 5:00 pm CEST on Saturday. All races will be broadcasted live on EuroNASCAR’s social media platforms – YouTube, Facebook, Twitch – as well as on the NWES App and Motorsport.tv.