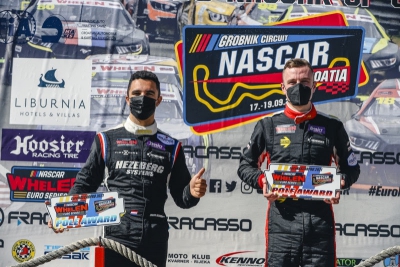 It was another perfect day for Hendriks Motorsport at the Automotodrom Grobnik in Croatia. The Dutch powerhouse put their #7 and #50 Ford Mustangs at the top of the standings after two 30-minute sessions in EuroNASCAR PRO and EuroNASCAR 2. While Loris Hezemans scored his fifth Pole Position of the 2021 NASCAR Whelen Euro Series season, Tobias Dauenhauer will start in the lead for the third time this year.

The 2019 NWES Champion was the dominant force in EuroNASCAR PRO in Qualifying: Hezemans, who entered the event as the championship leader with a 18-point gap on his teammate Vittorio Ghirelli, clocked a 1:28.651-lap and beat title contender Gianmarco Ercoli in his #54 CAAL Racing Chevrolet Camaro by 0.296 seconds. The Italian also topped the Junior Trophy classification. Hezemans will start from first place in EuroNASCAR PRO Round 7 on Saturday.

Ghirelli, who visited Victory Lane in EuroNASCAR PRO at Most for the first time in his career, put his Mustang into third place – 0.364 seconds shy of the Dutchman at the top. Another Hendriks Motorsport driver will also start from row 2 on the grid: Giorgio Maggi from Switzerland, while reigning champion Alon Day rounded out the top-5. The Israeli was 0.630 seconds slower than Hezemans.

EuroNASCAR 2: Dauenhauer on the pole with a late charge

The EuroNASCAR 2 pole position for Round 7 of the season went to Tobias Dauenhauer thanks to a 1:29.830 lap in the closing stages of the 30-minute session. It wasn’t easy though for the current points leader: the Hendriks Motorsport team had to quickly work on a technical issue to the brakes of the #50 Mustang and Dauenhauer had only a few minutes to post his best time.

Vladimiros Tziortzis, at the wheel of the #1 Academy Motorsport / Alex Caffi Motorsport Mustang, was just 0.167 seconds slower than the German and held the lead for most of the session, which was interrupted by a red flag to recover the stopped car of Leonardo Colavita. Martin Doubek drove the #7 Hendriks Motorsport Mustang to third ahead of the DF1 Racing duo of Simon Pilate and Justin Kunz. The top-5 drivers were separated by just 1 second.

Advait Deodhar was the first CAAL Racing driver in sixth and edged the first Rookie Trophy contender Alberto Panebianco, driving the #89 Not Only Motorsport Camaro. Max Lanza took eighth place and the lead in the Legend Trophy just ahead of the #48 Marko Stipp Motorsport Camaro of Yevgen Sokolovskiy.

In his first outing on a dry track aboard the #69 Team Bleekemolen Mustang, Melvin de Groot rounded out the top-10.

All the races of the NASCAR GP Croatia from Automotodrom Grobnik will be streamed live from 13:35 CEST on the EuroNASCAR social media platforms – Youtube, Facebook and Twitch – as well as on the NWES app and on Motorsport.tv.