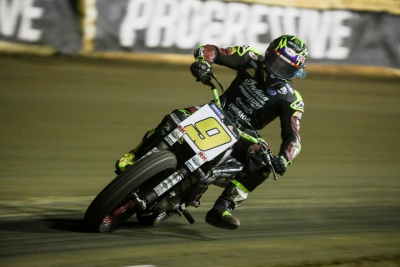 On Saturday, Mees wasted no time getting out ahead of the Main early and fast. He came into the weekend with first place in mind, as he makes a late-season push to claim his seventh-career Grand National Championship. The race quickly became a competition for the other two podium positions, as Mees distanced himself with a comfortable lead that allowed him to cruise past the finish line while celebrating with both hands in the air. Six riders joined the battle for second and third, which led to last-lap heroics by Indian Motorcycle privateer Jarod Vanderkooi, as he secured his fourth second-place finish of the season.

During Sunday’s Main, Mees took control after a few laps and began to distance himself. Bauman again caught himself in a battle for second – exchanging passes with Indian Motorcycle privateer Sammy Halbert. Both Bauman and Halbert were followed closely by Vanderkooi and fellow Indian Motorcycle privateer Bryan Smith, who recently made his retirement announcement and was riding Mees’ back-up bike. Just as Mees finished with ease, the pack battling for second saw Smith make an incredible two-rider pass and finish his legendry 20-year career with a second-place finish.

“What an amazing weekend in Sacramento. Not only do we have our two star riders set to go head-to-head for the 2021 championship, but fans got to witness Bryan Smith finish his illustrious career with a second-place, podium finish and take one last victory lap with his good friend and long-time rival, Jared Mees,” said Gary Gray, Vice President of Racing, Service & Technology. “This is what racing is all about, and exactly the type of finale the fans want to see, as Briar strives for his third-consecutive championship and Jared his seventh.”

With 60 career wins, six championships, and multiple records, Mees has been vocal about his career goal to reach Scottie Parker’s record of nine championships. Leading Bauman by four points, Mees has finished strong, winning five of the last six races, and put himself in a position to recapture the No. 1 plate.