Mees Gets His Mojo Back in New York Short Track II 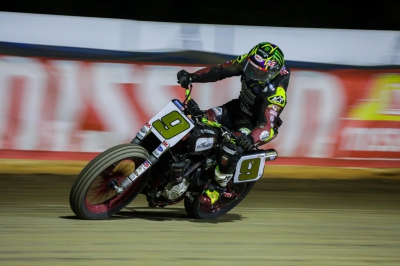 With line choice on the slick Weedsport Speedway surface very much in question for the bulk of the field ahead of the Mission SuperTwins presented by S&S Cycle Main Event, Mees rode decisively. The multi-time Grand National Champion went to the high line from the start and made it work to his advantage.

Despite his rivals’ momentum, Halbert remained committed to the low line he took to victory the night before and gradually came under fire from above by Robinson’s Mission Roof System’s teammate, Jarod Vanderkooi (No. 20 Mission Roof Systems Indian FTR750), as well.

Robinson flashed the pace to offer a potential challenge to Mees at mid-distance but fell back to Halbert and Vanderkooi late after encountering brake issues. Increasing the intensity to the maximum, the three met on the race’s final lap, going side-by-side as they entered the final corner. Vanderkooi split his adversaries as they exited Turn 4 to snatch away runner-up honors at the checkered flag, beating Robinson by a meager 0.003-second gap.

A bruised and battered Halbert was relegated to fourth despite coming home just 0.064 seconds back of second place.

Meanwhile, defending Grand National Champion Briar Bauman (No. 1 Indian Motorcycle/Progressive Insurance FTR750) never really found his footing. After coming together with Robinson early, Bauman tried the low, middle, and high lines to no avail. He was ultimately tracked down and passed by JD Beach (No. 95 Estenson Racing Yamaha MT-07 DT), who took the final spot in the top five in the process.

The victorious Mees said, “I always have a lot of passion and heart for what I do but getting a win is always a good thing. I said it earlier, going to win a Mile it’s like, ‘Oh yeah, he should,’ because I’ve got a really good package for a Mile, and I’m older and really experienced. I always had really great success on these slippery, small car tracks, but the last couple years, I kind of lost touch with that and Briar has been killing us with that. So to come out here and actually win a clay Short Track, it feels really phenomenal to get that mojo back again.”

Despite Mees earning his third win of ‘21 and Bauman taking his worst result of the season in sixth, Bauman continues to lead the Mission SuperTwins points standings by a healthy 22-point margin over Mees (197-175). Robinson is third at 168.

Morgen Mischler (No. 13 Mission Roof Systems KTM 450 SX-F) earned his second-career AFT Singles victory -- his first since 2018 -- and did so in about the most Morgen Mischler-esque manner imaginable.

Starting from Row 3, Mischler ignored the deep pack of riders scraping down low and instead railed his way around the extreme high line. In just a matter of a couple short laps, Mischler was in the lead and leaving the field in his wake en route to the checkered flag.

The win came only after Mischler had stacked up an incredible 16 podiums (including six this season) between victories.

After taking the cathartic triumph, he said, “I nailed the start and was sitting pretty good. I came out of Turn 4 and was already doing pretty well. Then it was just a matter of how high can we run it? After one or two laps, it was pretty incredible to come through the pack from the third row. It’s great. It was a long three years, but it feels so great to be up here.”

Once Mischler made it clear the high line was the fast line, several riders reconsidered their tactics. One of those riders was Brandon Kitchen (No. 105 Husqvarna Motorcycles/Vance & Hines Husqvarna FC450), who made a late push to overhaul the likes of Dallas Daniels (No. 1 Estenson Racing Yamaha YZ450F), Trent Lowe (No. 48 WBR/Suzuki Motor of America RM-Z450), and Tanner Dean (No. 38 1st Impressions Race Team Honda CRF450R) to finish as the race’s runner-up and secure his first podium of 2021.

Despite not getting a great start and never settling into a comfortable line, defending champ Daniels still managed to fight his way onto the box. Combined with last night’s victory, his Saturday third not only saw him get his title campaign back on track, but reclaim the championship lead.

Lowe finished fourth, while pre-race title leader Max Whale (No. 18 Red Bull KTM Factory Racing 450 SX-FFE) minimized the damage by slipping past early leader Dean at the flag to round out the top five.

It was several years in the making, but Cameron Smith (No. 44 Fredericktown Yamaha/Richie Reynolds Racing MT-07) is officially a Progressive American Flat Track Main Event winner.

Smith first showed the potential to run up front in AFT Singles competition as far back as the 2016 season, but he didn’t truly establish himself as a threat to claim the checkered flag until this season. Following a pair of ‘21 runner-ups -- including last night’s near miss -- Smith at last broke through with a dominant victory.

Smith made his move just past half-distance and did so in style; he powered around the outside of Bromley and then brushed back his opponent’s attempted counter maneuver to lock down first position. Once in front, he dropped the field en route to a 1.270-second margin of victory.

“Oh my gosh, we’re so excited to come out here and get a win finally,” Smith said. “After getting second two times, I think we were ready. We knew we could do it and we showed it tonight. And big thanks to (my crew), they made me feel like I was sailing the ship on dry land, I was so smooth out there.”

Despite being unable to stand and riding in intense pain after injuring his left ankle last night, Gauthier not only soldiered on, he worked past Bromley to improve upon his Friday third with a runner-up result on Saturday.

Unfortunately for Bromley, his slide down the order didn’t end until after the race’s final corner. Texter pulled off a last-gasp move to bump Bromley off the podium altogether after he looked to be in good shape to score a first win of ‘21 over the Main’s opening half.

Ryan Varnes (No. 68 RVR/Rausch Fuel Kawasaki Ninja 650) held off Ben Lowe (No. 25 Mission Roof Systems Harley-Davidson XG750R) to complete the top five. Lowe’s sixth still came as an impressive performance considering he was forced to start from the back of the pack, burning his provisional start after crashing out of contention in his Semi.

The legendary Law Tigers Peoria TT presented by Country Saloon returns to the Progressive American Flat Track schedule next weekend for the return of this historic race on Saturday, August 21. Tickets are available for purchase now at https://store.americanflattrack.com/ebooking/ticket/view/id/3444/. For those viewing from home, live coverage will be available on any device for only $1.99 a month via TrackPass on NBC Sports Gold.