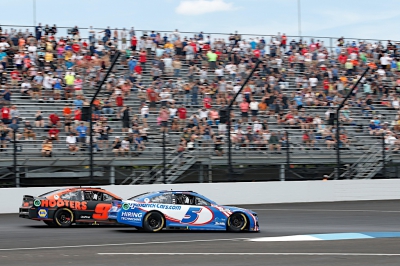 Spent the weekend at Indianapolis Motor Speedway with our Social Media Director, Melissa Shoffner. She had some interesting thoughts on the days.

We spent all of 2020 with no in person racing. We even spent the first part of this year with limited access to racing. This past weekend at Indianapolis Motor Speedway, there were no limits to the number of fans that were allowed into the track at 16th and Georgetown in Indianapolis. There were also no mask mandates. True, there some people who were wearing masks, but the majority of people weren’t wearing masks, unless you went into the Media Center ?, however I spent most of my time with the fans on the viewing mounds that were open once again.

People were having a BLAST! It felt much like it did pre-Covid. Doug Boles, President of IMS was wandering around, talking to all fans and keeping in touch with the fan base, of all ages. I saw him stop and talk with a very young child and then took a pic with mom and the child. He then was kind enough to stop and talk with us and we even got a pic with him as well! On Sunday, during the Verizon 200, he was even out on the track helping with clean up during one of the red flags. I know that we have another variant out there, but this weekend felt like we were heading back into normalcy.

In other news, it was the Shootout at the OK Corral. We will get to that in one moment. It was an historic weekend at Indianapolis Motor Speedway. For the first time in history, IndyCar and NASCAR were at IMS at the same time for the weekend. We had an exciting weekend on the road course as compared to other Brickyards. For the first time, the Brickyard was held on the road course which is another great idea from new track owner Roger Penske. Let me just say quickly, what great improvements were made. Roger, can I thank you for paving the media lot…that was one of my favorite changes! ?

In all seriousness, what an exciting weekend it was to see IndyCar, Xfinity and Nascar on the road course. That being said, it took some beating. We saw that come to fruition in the final laps of the Verizon 200 when we saw total mayhem.

I think for the first time, that I can remember for the ‘Brickyard” we have seen “the big one”. The road course produced one of the biggest wrecks we have seen at Indy in Nascar. The curb came up, the spikes came up, multiple cars were everywhere. This is insane and unacceptable. This is a learning experience. A caution should have called the lap prior. Maybe Nascar has some explaining to do. At the end of the day, because of the errors of others that pushed Denny Hamlin out of the way, A.J. Allmendinger wins at Indianapolis. Put on your conspiracy hat people, it’s about to get good!

Tune into The Balance every Saturday morning from 9-11am EST. We enjoy being a part of Speedway Digest and bringing you your racing and sports news.

Rate this item
(2 votes)
Tweet
« Bobby Pierce Wins No. 12, Brandon Bollinger First-Time Modified Winner at I-55 The Force is strong in Topeka »