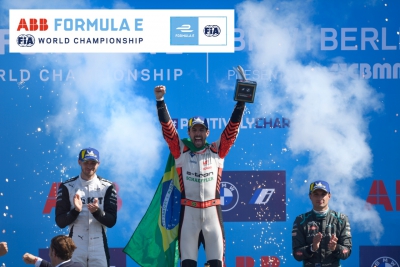 Audi Sport ABT Schaeffler’s Lucas di Grassi secured victory in the first of two races on the final weekend of the ABB FIA Formula E World Championship.
In a dramatic 2021 BMW i Berlin E-Prix presented by CBMM Niobium, the Brazilian put in a red-hot performance in the searing heat of the German capital to force himself into title contention, with ROKiT Venturi Racing’s Edoardo Mortara finishing second and Jaguar Racing’s Mitch Evans taking third.
Mortara now sits in second in the championship on 92 points, with Mercedes-EQ’s Nyck de Vries still in the lead despite a pointless race and BMW i Andretti Motorsport’s Jake Dennis rounding off the top three. Evans’ result meanwhile puts Jaguar top of the Teams’ Championship.
There was a feast of competitive, wheel-to-wheel racing once again in the all-electric racing series on a track known for overtaking at the Tempelhof Airport Street Circuit.
The two DS TECHEETAH drivers Jean-Eric Vergne and Antonio Felix da Costa began the final weekend on the front row of the grid with Vergne claiming the Julius Baer Pole Position, and Da Costa starting in P2 before falling down the grid to finish sixth and seventh respectively.
ROKiT Venturi Racing’s Norman Nato made full use of the overtaking opportunities, enhanced by the ATTACK MODE increasing to one eight-minute power boost as opposed to the usual two four-minute spells, to finish an impressive fourth.
TAG Heuer Porsche’s Pascal Wehrlein was overtaken by the two Nissan e.dams drivers and subsequently forced into the pits with car damage on his first home race with German manufacturer Porsche.
Meanwhile, there was more frustration for Jaguar Racing’s Sam Bird who was forced to retire for the third consecutive race due to an earlier collision to all but end his hopes of a first Formula E title.
De Vries had to pit, denting his team’s hold in the manufacturer’s championship, despite the Dutchman himself still leading the Drivers’ Championship.
Di Grassi, who is still looking to secure a new seat ahead of Season 8, made full use of the driver movement and used all his experience in the Net Zero Carbon Championship to come out on top in a battle at the front of the grid with Mortara and Evans.
The 37-year-old could barely contain his delight on the team radio as he took the chequered flag in front of a passionate home support for the German manufacturer.
The track will switch to clockwise for tomorrow’s race as part of a mix-up of the circuit configurations, with the Saturday race using the traditional anti-clockwise direction.
And the result leaves everything to play for heading into the final race of Season 7 with several drivers still in play for the championship title.
Rate this item
(0 votes)
Tweet
« WeatherTech Raceway Laguna Seca to celebrate the 70th Anniversary of the Pebble Beach Road Races at the Rolex Monterey Motorsports Reunion J.R. Todd quickest at Menards NHRA Nationals presented by PetArmor at Heartland Motorsports Park »