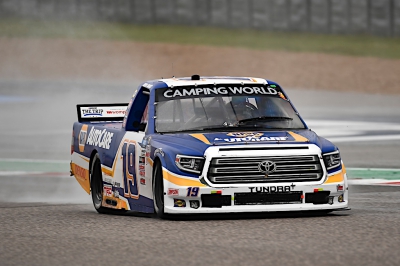 Derek Kraus, driver of the McAnally-Hilgemann Racing No. 19 Hunter Nation Toyota Tundra, will have one more shot at making this year’s playoffs in the NASCAR Camping World Truck Series – when the circuit visits the historic road course of Watkins Glen International for the United Rentals 176 on Saturday.

With it being the final regular season race, Kraus and his team know it’s their last chance to make the playoffs.

They have been building momentum in the second half of the season. Kraus is coming off a strong performance in the past three series events – winning the pole in two of those races and notching three stage wins. He had a top-10 finish at Pocono and a fifth-place finish at Knoxville, in the most recent series race – moving up three spots to 12th in the championship standings.

A win on Saturday would lock him into the playoffs.

The race marks the return of the series, after a two-decade absence, to the New York venue it visited five times – from 1996 to 2000.

Kraus was not even born the last time the Camping World Truck Series raced at Watkins Glen. He does have experience, however, on the 2.45-mile track in NASCAR’s regional level. The 19-year-old from Stratford, Wisconsin notched a top-10 finish there in NASCAR K&N Pro Series competition in 2019, while driving for Bill McAnally Racing. Kraus – who qualified sixth, but had to drop to the back of the field for the start of that race due to repairs for a mechanical issue – charged to ninth place before the race was cut short due to weather conditions.

Saturday’s event marks the third and final road course race on this year’s Camping World Truck Series schedule. Kraus finished seventh on the road course at Daytona International Speedway in February and 21st in Texas at the Circuit of the Americas in May.

Derek Kraus – About this week

What are your thoughts as you prepare to race at Watkins Glen?

“I’m confident that the MHR guys will bring another fast Toyota Tundra this week. Coupled with my experience in the NASCAR K&N Series at The Glen, it should benefit me and give me what I need to be in contention.”