Bridget Continues to Learn and Gain Experience at Colorado 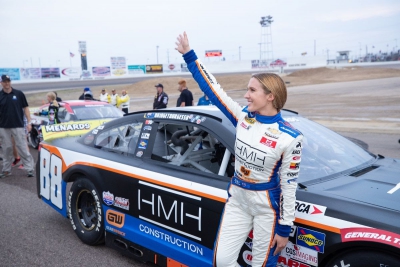 Bridget Burgess and BMI Racing headed east with the HMH Construction Chevrolet to Colorado National Speedway for round 4 of the ARCA Menards West.

Throughout the day, there was a weather watch with officials warning the teams there may be a change of schedule due to potential rain. Just as Bridget was getting into the car to start practice/qualifying the clouds opened and the rain started to fall. While there was hope that it would ease, unfortunately, it did not, and practice was cancelled with the race being moved up to a 7 pm start time.

The lineup was determined by owners’ points with Bridget starting 10th in the HMH Construction Chevrolet for the NAPA Auto Parts Colorado 150. A stacked field of 18 cars accelerated past the grandstand as the green flag dropped.

Due to the lack of practice ARCA had a planned competition caution at lap 25 to allow the teams to make any changes needed. Bridget chose to stay out commenting over the radio “the car feels good, no changes needed”.

Bridget continued working her lines for the rest of the race, working hard to hold her position at some points, as well as making gains and moving up to 7th during the race. The last 10 laps were a battle and Bridget did her best to hold on to the position but unfortunately couldn’t and finished the race in 9th, her 2nd top 10 of the year in the HMH Construction Chevrolet.

While Bridget was disappointed with her performance over the last 10 laps of the race, she felt it was a good learning experience, knowing what the weaknesses are that she needs to work on.

A replay of Saturday’s NAPA Auto Parts Colorado 150 will broadcast on NBCSN on Wednesday, Aug. 11, starting at 3 p.m. ET.

Bridget’s next race will be the ARCA Menards West will return to action on Aug. 21 with a 150-lap race at California’s Irwindale Speedway.