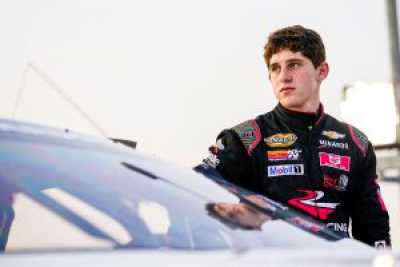 Rev Racing NASCAR Drive for Diversity Development Driver Nick Sanchez, driver of the No. 2 Max Siegel Incorporated Chevrolet will head to Winchester Speedway in search of his first win of the season.

Sanchez has only finished outside the top-five three times since his breakout race at Talladega in April. At his last ARCA short track race at Toledo, Sanchez tied his career-best finish of third. 96-points behind Ty Gibbs for the championship points lead, Sanchez has turned into one of four ARCA Menards Series championship contenders.

“We have really good momentum coming out of Iowa, finishing Top-5 there,” says Sanchez. “You know, even though it was a P5 finish, I think we had more to show than what we were able to. We have a fast car going into Winchester, and if we execute and fire on all cylinders, we will have a solid showing all 200 laps this Saturday. ”

One would think Sanchez is content with his impressive Top-5 streak, but Sanchez wants more.

“I will say, it is never bad to have a streak of Top-5s, but at the end of the day…stats are stats. People are probably going to remember the guy who wins more than the guy who has 6 Top-5s in a row. I think for me and my career, I just have to win. Top-5s aren’t enough to really perform and show my strengths to the whole industry. So I’m excited to go to Winchester and contend for a win.”

On July 31st, Nick Sanchez and Rev Racing will head back to the midwest to race at Winchester Speedway in the Calypso Lemonade 200. Qualifying will begin at  6 p.m. CT, followed by an autograph at 6:45 p.m. CT. The race will air on MAVTV and TrackPass on NBC Sports Gold beginning at 8 p.m. CT.