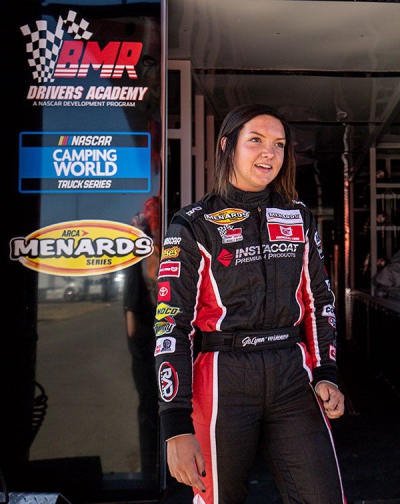 Alabama’s Jolynn “JoJo” Wilkinson will debut in the ARCA Menards Series West this weekend for Bill McAnally Racing, driving the no.19 Instacoat Premium Products Toyota Camry at Colorado National Speedway.  Wilkinson arrives in the series after a busy season of Pro Late Model and BMR Drivers Academy races to prepare her for the 625hp stock cars.

Wilkinson is a third-generation racer and the second-generation in her family to compete in ARCA-sanctioned competition. She continues the “Alabama Gang” tradition from her hometown of Hueytown as well.

“I can’t thank Anthony from Instacoat Premium Products enough,” Wilkinson said. “They’ve been beside me this whole entire journey and I’m thankful for them. I’m really excited to see what I can do at Colorado and learn as much as I can in one of these ARCA cars.”

Wilkinson has accumulated ten starts in the BMR Drivers Academy – a NASCAR Driver Development Program – this season with several runner-up finishes and fast-times across three different California race tracks. She also tested for BMR in January and again on race week as she aims for Colorado.