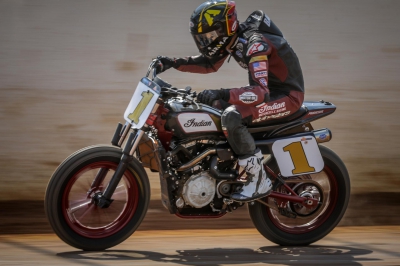 One day after dominating the pre-race test, Price looked more than capable of doing the same in Saturday’s Main. The Mission Roof Systems pilot worked his way up from outside the top five and into the lead with apparent ease, grabbing the lead just a minute-and-a-half into the contest.

It took the remaining eight-and-a-half minutes for Bauman to reel him back in, frequently employing a very wide line that provided the requisite momentum when it came time for the decisive strike.

That ‘strike’ was actually ‘strikes’ as Bauman threw in a pair of hard passes over the race’s final two laps to put Price behind him and keep him there to the checkered flag.

After securing the 19th win of his career, Californian-turned-Pennsylvanian Bauman said, “I knew I needed to do it late. (Price) had been known today to not be afraid to kinda come up the inside and meet you at the exit. I knew if I was going to do it, I had to run scared and get out quick. I got him once, and then he was able to get back by me in 3 and 4. So I did it again.

“I love this stuff. I love this state, and I love these types of tracks. It was kind of a bummer that I struggled for so long (throughout the day), but I don’t really get that fired up until the Main Event. I was happy to get fired up when it counted and make that one count.”

For Price, the runner-up represented yet another near-miss. On the upside, he also demonstrated both the speed and skill to push the world’s top dirt tracker to the brink.

“It’s a boost of confidence, but I’m gutted at the same time,” Price said. “I led pretty much the whole entire race. I felt him the last few laps, but he made a good move going into Turn 1. I tried to get him back but the track is very technical out there, and I just couldn’t get a drive off of Turn 4 to challenge him for the win.”

Jarod Vanderkooi (No. 20 Mission Roof Systems Indian FTR750) translated his first-ever Mission Challenge win into the early lead. However, he ultimately found himself overhauled by Price, Bauman, and, finally, Jared Mees (No. 9 Indian Motorcycle/Progressive Insurance FTR750), who snatched away the final spot on the podium.

Fifth went to Davis Fisher (No. 67 BMC Racing/Dick Wall 60 Indian FTR750) by a scant 0.008-seconds over Bronson Bauman (No. 37 Indian Motorcycle of Oklahoma City FTR750), who came out of his Semi looking like a Main Event favorite.

Brandon Robinson (No. 44 Mission Roof Systems Indian FTR750) finished an uncharacteristic seventh. That off result allowed Bauman to rip open a rather significant championship lead, as Bauman now heads the order by a full 25 points (164-139) over Robinson with Mees in third at 133.

The win didn’t come easily. To earn it, the Australian was forced to go back and forth with a hard-charging Kody Kopp (No. 143 Smartop/Jones Honda/Latus Motors CRF450R), whose performance went a long way to fully justifying the rookie’s abundant preseason hype.

Kopp led several laps and squared up Whale on a number of occasions as part of an adrenaline-fueled ride to a maiden Progressive AFT podium. While his sights were set on the win, Kopp was nearly displaced to third with high-line maestro Morgen Mischler (No. 13 Mission Roof Systems KTM 450 SX-F) ending a race-long charge 0.022-seconds short of the runner-up spot.

Trevor Brunner (No. 21 American Honda/Progressive Insurance CRF450R) and Trent Lowe (No. 48 WBR/Suzuki Motor of America RM-Z450) finished fourth and fifth, respectively. The two followed in Mischler’s wake, reeling in the leaders to put themselves in podium contention on a thrilling final lap that saw the top five finish within a second-and-a-half at the checkered flag.

Race winner Whale said, “This track is really hard when you’re leading; I didn’t know what anybody was doing behind me. I had a good start, but then I saw a red front fender come around the outside in (Turns) 1 and 2 and thought, ‘Oh -- I’m going to have to see what that is next lap.’

“Kody rode a great race with very minimal mistakes, but I found a few lines in 3 and 4 and had a better run off 4 and ended up getting him. But he rode awesome.”

Whale’s big night was made that much bigger as a result of the relative struggles of defending class champion Dallas Daniels (No. 1 Estenson Racing Yamaha YZ450F), who finished ninth, and rival Henry Wiles (No. 17 American Honda/Progressive Insurance CRF450R), who finished 15th.

Whale now leads Daniels by 15 points (151-136). When asked how that expanded margin impacts his strategy moving forward, he said, “Nothing changes. I’m just going to try to keep winning races. The bike is good and I’m enjoying it, so I might as well keep trying.”

“It felt awesome winning in front of all the PA fans,” Gauthier said. “That was a fun race track, and I hope we come back next year. That helped my confidence so much. I’ve just been struggling so much this year. I’ve been trying my hardest, but I feel like I shouldn’t be trying so hard. Tonight, I just cruised out there. I can’t thank the Vance & Hines guys enough for giving me an awesome motorcycle.”

Title leader and holeshot expert Cory Texter (No. 65 G&G Racing/Yamaha Racing Yamaha MT-07) made Gauthier’s breakthrough a bit easier by stumbling off the start from pole. By the race’s midpoint, Texter clawed his way into a three-way battle with Bromley and 2020 AFT Singles champ Dallas Daniels (No. 32 Estenson Racing Yamaha MT-07).

Despite taking part in his first-ever oval race aboard a twin-cylinder (he earlier won his class debut at the Atlanta Super TT), Daniels overcame the twin challenge presented by Texter and Bromley to lock down an most impressive runner-up finish.

As for Texter, the fact that a seventh podium in eight races felt like a bit of a disappointment is a testament to the type of season he’s putting together. Despite Gauthier’s Saturday night triumph, Texter walked away with a still-imposing 31-point lead in his favor.

Johnny Lewis (No. 10 Moto Anatomy X Powered by Royal Enfield Twins FT) fought his way forward throughout the Main, ultimately putting the Royal Enfield ahead of Bromley’s Yamaha for fourth by 0.007 seconds.

The Port Royal Half-Mile presented by Appalachian Harley-Davidson will air on NBCSN on Sunday, August 15, at 10:00 p.m. ET/7:00 p.m. PT, featuring exclusive features and cutting-edge aerial drone and onboard footage.

Progressive American Flat Track is in for a double dose of close-quarters action with the Mission Foods New York Short Track I & II presented by Mad Max Indian Motorcycle doubleheader at Weedsport Speedway in Weedsport, New York, on August 13-14. Visit https://store.americanflattrack.com/ebooking/ticket/view/id/3478/#selectTickets to purchase your tickets now. For those viewing from home, live coverage will be available on any device for only $1.99 a month via TrackPass on NBC Sports Gold.