Eric Nascimento to Compete at Colorado National With Arca West 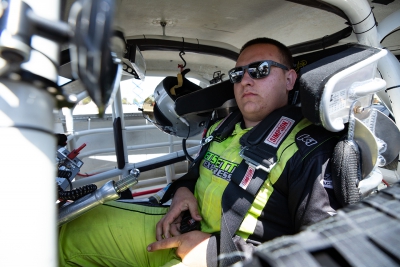 20-year-old Manteca, Calif. driver Eric Nascimento will make his second-career ARCA Menards Series West start on Saturday at Colorado National Speedway in the NAPA AUTO PARTS Colorado 150. The driver known to many as “Bubba” will drive the No. 4 Finishline Express Toyota Camry in a joint effort with Don Wood, Velocity Racing, and Bill McAnally Racing. The event will be broadcast live on TrackPass on NBC Sports Gold and tape-delayed on NBCSN as well.

Nascimento is the 2020 Stockton 99 Speedway Late Model champion and a winner in the MAVTV-televised Nut Up Pro Late Models at Madera Speedway in 2021. The Modesto Junior College student qualified seventh in his debut at Sonoma Raceway in June before ultimately finishing 14th. Nascimento is also a former winner in the 51FIFTY Jr. Late Model Series at Madera Speedway. He participated in BMR Drivers Academy – a NASCAR Driver Development program – events at Thunderhill Raceway and Sonoma Raceway in May before his entry into ARCA competition in June.

The entry will carry additional support from RJs Paintshop and Skipco Welding & Industrial. Nascimento has traveled the 80 miles from Manteca to Loomis, Calif. daily over the last three weeks to help prepare the car for the event. Preparation has been aided by championship crew chief Ty Joiner, while his uncle Mike Nascimento will serve as the crew chief for the weekend’s race.

Drivers will have a practice and qualifying session from 4:30 p.m. to 5:45 p.m. Mountain Time. The NAPA AUTO PARTS Colorado 150 goes green at 8:05 p.m.  Coverage can be viewed on TrackPass on NBC Sports Gold. Delayed television coverage will be available on NBCSN on Wednesday August 11 at 3 p.m. Eastern / 12 p.m. Pacific.