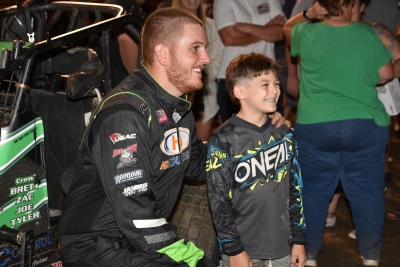 The fine season of Garden Grove, California sprint car racer Brody Roa continued last Saturday night when he finished second in the USAC/CRA Sprint Car Series main event before a large, enthusiastic crowd at Perris Auto Speedway.  The podium finish allowed the veteran racer to close the deficit on first place from 62-points down to 36 heading into the “Bud Stanfield Memorial” at the  Santa Maria Raceway on August 14th.

As per usual in July, the temperature was more than hot at the famous Riverside County speed plant.  However, that did not deter the large crowd from coming out to see a night of exciting sprint car racing.  Twenty-two cars signed into the pit area.  Roa qualified fourth fastest of the 22 when he toured the half-mile clay oval in 16.600.  He started fifth in the first 10-lap heat race and finished third earning him a start inside the second row for the 30-lap A main.

When the green light turned on to start the main event, Roa immediately jumped into second.  By the end of the opening circuit, the 30-year-old slipped back to position three.  He never ran farther back than third in the race and was in second a majority of the time.  A restart with three laps to go saw him on the tail of the leader when the green flag flew.  He steered the green #91R to the inside coming off turn four on the restart and started to pull alongside the leader prompting the fans to rise from their seats to catch a better glimpse of the battle for first.  However, the leader had too much momentum and beat Roa back to turn one.  From that point on, Roa maintained second and crossed the line seven car-lengths behind the winner.

“We just needed a little bit more to run with that #92 car (winner Austin Williams) tonight,”  Roa told the crowd at the conclusion of the exciting race.  “We were a little snug getting in and a little free getting off.  We will take second and roll outta’ here and into Santa Maria in a couple of weeks and hopefully redeem ourselves there.  I am going to get a win with my daughter one of these times.  All of my wins have come without her here.  I want to thank my family for putting up with this stuff all these years.  Hopefully we are going to knock off some wins this year.”

Roa’s impressive 2021 record continues to roll on.  Thus far he has made 15 starts in a sprint car and he has only finished out of the top three five times!  In the last three months he has started seven races and has placed in the top three six times.  The one race in that span that he finished worse than third was a fifth in the USAC West Coast Sprint Car Series on June 26th.

The new 2021 Brody Roa Racing shirts (graphics below) have arrived and are on sale now.  To see the full line and to order products, including shirts, sweatshirts, caps, beanies, baby onesies, plush blankets, jigsaw puzzles, stickers, mugs, and more, visit the team store at https://www.brodyroa.com/shop/.