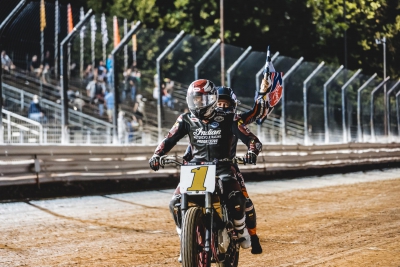 The 2021 Progressive American Flat Track season will resume this weekend in something of an unofficial homecoming round for the paddock with the Port Royal Half-Mile presented by Appalachian Harley-Davidson at Port Royal Speedway in Port Royal, Pennsylvania, this upcoming Saturday, July 24.

Despite the event making its first-ever appearance on the series’ calendar, its importance was cemented with its announcement due to its location. Pennsylvania is almost inarguably the single greatest producer of elite flat track talent with an outsized percentage of the field claiming home ties of one sort of another to the state.

As such, any home-state advantage in the evolving championship chases are largely negated this weekend, particularly in the premier Mission SuperTwins presented by S&S Cycle class where the leading trio are all either native or resident Pennsylvanians. And as such, double defending Grand National Champion Briar Bauman (No. 1 Indian Motorcycle/Progressive Insurance FTR750), second-ranked Brandon Robinson (No. 44 Mission Roof Systems Indian FTR750), and multi-time GNC Jared Mees (No. 9 Indian Motorcycle/Progressive Insurance FTR750) will pick up their battle for supremacy with a bit of extra motivation pushing them forward.

Bauman landed the most recent blow with his well-timed Lima triumph, but even so, Robinson remains on fire and Mees comes in with an extra week to heal following last weekend’s weather-related cancellation.

Looking a bit deeper, the continued progress of Jarod Vanderkooi (No. 20 Mission Roof Systems Indian FTR750) will be of interest as he continues to rack up podium finishes and threatens to turn this into a four-way title fight.

It’s a similar story in AFT Production Twins presented by Vance & Hines where six of the top eight-ranked riders -- including the top two -- will be angling to impress in front of their home-state fans.

Title leader Cory Texter (No. 65 G&G Racing/Yamaha Racing Yamaha MT-07) has opened up a healthy 39-point advantage that only stacks ever higher with each successive standout performance.

Fellow Pennsylvanians Dalton Gauthier (No. 79 D&D Cycles/Vance & Hines Harley-Davidson XG750R), Dan Bromley (No. 62 Memphis Shades/Vinson Construction Yamaha MT-07), Ryan Varnes (No. 68 RVR/Rausch Fuel Kawasaki Ninja 650), Cameron Smith (No. 44 Fredericktown Yamaha/Richie Reynolds Racing MT-07), and Johnny Lewis (No. 10 Moto Anatomy X Powered by Royal Enfield Twins FT) will all need to be at their best in hopes of pushing Texter as far down the order as possible in hopes of eroding his championship padding.

While that’s obviously easier said than done, it’s worth remembering that Lewis and Varnes did manage to finish ahead of Texter last time out.

The AFT Singles class is less of an intra-state affair with the top-ranked Pennsylvanian being Shayna Texter-Bauman (No. 52 Red Bull KTM Factory Racing 450 SX-FFE), who currently sits sixth in the points.

Texter-Bauman is more than capable of contributing to a home-state victory sweep, however, considering she’s the winningest rider in class history and opened her ‘21 campaign with a double victory on Volusia Speedway’s similarly clay Half-Mile.

The chances for such a sweep improve up considerably if you allow for the inclusion of Australian Max Whale (No. 18 Red Bull KTM Factory Racing 450 SX-FFE), who makes Pennsylvania his home base during the race season. The championship leader by virtue of the tie-breaker over reigning AFT Singles champion Dallas Daniels (No. 1 Estenson Racing Yamaha YZ450F), Whale has been in tremendous form as of late, notching up two wins and a runner-up over his last four attempts.

The only rider with an argument of being even hotter is Henry Wiles (No. 17 American Honda/Progressive Insurance CRF450R), who has done the same over his last three attempts.

And with Daniels desperate to strike back and the usual assortment of a dozen or so riders with at least an outside chance at stealing away a win, Port Royal should deliver another high-drama AFT Singles Main Event.

The Port Royal Half-Mile also marks the return of Royal Enfield’s extremely popular BUILD. TRAIN. RACE. program which serves to highlight and celebrate women and motorcycle culture. There will be a special BUILD. TRAIN. RACE. exhibition and Q&A during the Fan Walk, in which fans will be invited to watch as the riders are interviewed about their specific racebike builds and their experiences as developing flat track racers.

There will be plenty of additional entertainment off track as well, highlighted by live music courtesy of Chasing Neon, who will bring their high-energy blend of live party music that ranges from country to classic rock and everything in between.

Fans looking to upgrade their racing experience are encouraged to reserve an all-day paddock access pass, allowing for free movement in and out of the pit areas for a true behind-the-scenes view of the Progressive AFT action. Limited quantities available.

The gates will open for fans at 3:00 p.m. ET with Opening Ceremonies set to begin at 6:00 p.m. ET/3:00 p.m. PT. Live coverage of the entire weekend’s racing activities will be available on any device for only $1.99 a month via TrackPass on NBC Sports Gold.

The Port Royal Half-Mile presented by Appalachian Harley-Davidson will air on NBCSN on Sunday, August 15, at 10:00 p.m. ET/7:00 p.m. PT, featuring exclusive features and cutting-edge aerial drone and onboard footage.