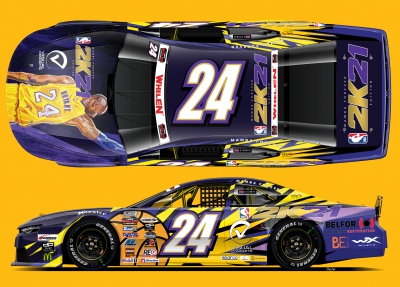 As NWES returns to the UK in 2021, Alex Sedgwick will also return to the EuroNASCAR PRO championship in Brands Hatch on July 3-4. The Brit will pilot the #24 Chevrolet Camaro for Academy Motorsport / Alex Caffi Motorsport with support from NBA 2K sporting a special livery in the colors of the Los Angeles Lakers as a tribute to the late Kobe Bryant.

“I’m super excited to return to the NASCAR Whelen Euro Series with the support of NBA 2K for my home race, American Speedfest. This event is one of my favorites on the European motorsport calendar and it’s one you just can’t miss,” said Sedgwick. “It’s a real honor to carry the NBA 2K branding with the Lakers colors and number 24 as a tribute to Kobe Bryant, and to be trusted to fill in for Jacques whilst he is away with other commitments. My most recent race in the Euro Series at the end of 2019 was my best result to date with a win in class. This time I’ll be looking to fight for the overall win!“

At just 22 years of age, Sedgwick already amassed 3 top-5s and 10 top-10s in just 17 EuroNASCAR PRO races. His last race at Circuit Zolder in 2019 coincided with his best results of fourth under the checkered flag. In four appearances at his home track of Brands Hatch, Sedgwick boasts one top-5 and two top-10s.

Greg Thomas, President of Visual Concepts and the creator of NBA 2K said, "We supported Alex earlier this year when he tested at the Daytona International Speedway, and we are proud to support his efforts at Brands Hatch in England. Alex is a highly competitive race car driver, and we are looking forward to seeing his career grow in the NASCAR Series here in the United States."

Alex's manager Ryan Johnston of InterPhase Entertainment said, "We are extremely grateful for NBA 2K and for this opportunity that team Academy Motorsport / Alex Caffi Motorsport put together for Alex with a competitive car and team with the help of Jérôme Galpin, CEO of the NASCAR Whelen Euro Series to coordinate all efforts."

“Academy Motorsport/Alex Caffi is proud to welcome in its lineup a fast driver as Alex Sedgwick, we will do our best to help Alex compete for the top positions in the highly competitive racing weekend in Brands Hatch. Our Team Owner Federico Monti is pushing all the team to be the best and Alex Caffi is the right person to lead the group,” said Piero Paolo Ciceri, Team Principal of Academy Motorsport.

The NASCAR GP UK at Brands Hatch will take place in the context of the eighth edition of the hugely popular American SpeedFest. Qualifying and all races will be streamed live on the EuroNASCAR social media profiles – YouTube channel, Facebook page and Twitch channel – as well as on Motorsport.tv.