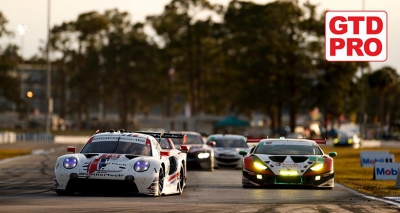 Since announcing plans to introduce the GTD PRO class – which will use cars built to FIA-GT3 technical regulations – to the IMSA WeatherTech SportsCar Championship in 2022 at Daytona starting with the Roar and Rolex 24, IMSA’s leadership team and technical staff has been working diligently on many key details for the new Grand Touring Daytona (GTD) or in short form GTD PRO class that will replace the current Grand Touring Le Mans (GTLM) class.
After countless hours of analysis and several technical working group meetings with all interested manufacturers and Michelin, IMSA’s official tire partner, IMSA today revealed the structure for GTD PRO heading into its 2022 debut. As announced in January, GTD PRO – which is geared toward factory-supported teams and drivers – and the Pro-Am GTD class both will use FIA-GT3 race cars.
“It was important that we worked in lockstep with our manufacturers and tire partner to develop the GTD PRO ruleset,” said IMSA President John Doonan. “Our IMSA technical team was thorough in its analysis and the end result allows us to chart a successful course for the future of factory-supported GT racing in GTD PRO as opposed to the customer racing nature of the GTD class. Ultimately, the market will speak as manufacturers confirm plans to participate, but we are very optimistic that we will have strong fields in both GTD PRO and GTD starting next year.”
Beyond using the same technical specifications, however, there are a number of similarities and subtle differences between GTD PRO and GTD as detailed here:
GTD PRO/GTD Technical Platform and Tires
GTD PRO/GTD Balance of Performance (BoP)
Sporting Regulations
Rate this item
(0 votes)
Tweet
« Nitro Rallycross Reveals Updated 2021 Season Calendar with New Southern California Stop; Public On Sale Date Announced Keegan Kincaid Dominates the Competition in 2021 Opener from Antigo »