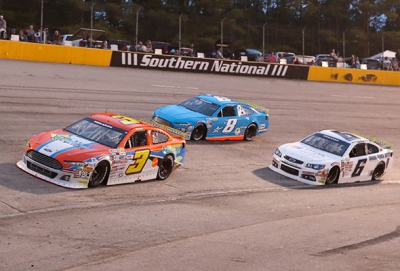 Callihan, driving the No. 3 Ford for the team owned by Willie and Dinah Mullins, ran as high as fifth during the Southern National 200 before fading to ninth in the final run to the checkered flag at the .4-mile paved oval.

“Davey did great. Davey showed his talent,” Willie Mullins said. “He didn’t tear up our car. His ability to run up front in our equipment made everybody know that we have great equipment and he is a great driver. That was an A+ effort.”

The Fredericksburg, Va., native qualified 11th in the 16-car field due to part of the car dragging on the track. The team fixed the problem prior to the start of the race, but because the team made unapproved changes to the car he was forced to start at the rear.

Callihan quickly went to work, racing his way up to fifth at the time of the first scheduled break at lap 75.

“We didn’t really have the qualifying effort that I thought we should of,” Callihan said. “We fired off really well in the first stage and we worked our way inside the top-five. We were really pretty pleased with that.”

Callihan continued to run in or near the top-five until the second scheduled break on lap 125. Unfortunately the team made the wrong adjustments to the car during the break and Callihan battled the car for the remainder of the race, eventually coming home ninth at the checkered flag.

“The last stage is kind of when it went backwards for us,” Callihan said. “I was fighting a loose on entry condition pretty much the whole first half, so we tried to make that better and we made some changes for the last half and it was just the wrong way. The car got way too tight on us. We just kind of faded that last segment. We weren’t very good at all and lost all that we’d gained.”

“I’d give myself a B+ probably. I think I did well,” Callihan said. “There are a lot of things that I learned that I can do better. There is definitely room for improvement, but all things considered I was very happy with my performance and the performance of the team.

“A big thanks to Mullins Racing, Dinah Mullins and Willie Mullins for putting me in their car. Thanks to CW Metals, Bugsy’s Auto and all of their sponsors that keep their team going. Without them we wouldn’t be able to make it possible.”

“He had either the flu or something going on and got sick,” Mullins explained. “He just couldn’t make it. We brought Robert with us because he’s always been a great addition to the team and helped us out. Unfortunately we missed having Tony there, but we made the best of the situation.”

Willie Mullins had nothing but positive things to say about Callihan, whom he hopes to have back in the car in the future should funding become available to do so.

Willie and Dinah Mullins also wanted to thank each and every member of the crew that joined the team at Southern National Motorsports Park Saturday. Without them, it wouldn’t be possible for the team to race.

“Thanks to our crew, everybody that was a part of this weekend to make it successful,” Mullins said. “It took everybody as a team effort. We definitely showed what kind of people we have surrounding us as a team.”