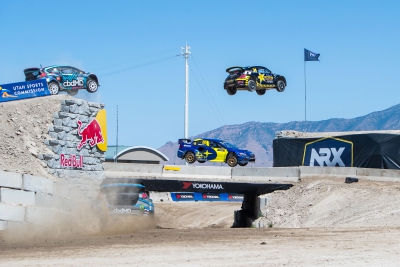 Nitro Rallycross announced today the first wave of teams which will compete in the dynamic motorsport property’s 2022 global series. Seven race teams, from not only Rallycross but also INDYCAR and off-road racing across North America and Europe, have already committed for NRX’s inaugural worldwide championship next year including, Vermont SportsCar, GRX, Dreyer & Reinbold Racing, Olsbergs MSE, Xite Racing, Good Times Racing and one additional team to be announced at a later date.

NRX 2022 will feature Rallycross’ first all-electric Supercar class and preliminary orders for the cutting-edge vehicle that will compete in that circuit, the FC1-X, were revealed as well. While NRX’s 2022 kickoff is still nine months away, the first group of cars that will be delivered to race teams ahead of the inaugural global season are sold out with orders for the second batch already coming in. To date, NRX has commitments for nine cars, with multiple conversations taking place regarding the remaining vehicles. NRX will limit sales to 16 cars in its first electric season.

“We have worked closely with the teams and manufactures to build the very best Rallycross car ever developed,” says Joe Carr, CEO of Thrill One Sports and Entertainment – NRX’s parent company. “This collaboration and buy-in is a testament to their belief in NRX as the future of Rallycross.”

With five races in the internal combustion class across the U.S. on the calendar this year and the initial teams competing in 2021 set, today’s news marks the next phase of NRX’s comprehensive multi-year vision.

“From the first announcement that Nitro Rallycross was expanding into a global series, industry response has been tremendous,” continues Carr. “This far-reaching commitment from some of the most prominent teams in motorsport demonstrates their strong confidence in the property and the direction we are headed.”

These teams will compete in Nitro Rallycross’ first integrated world championship, with the first of at least 10 races set to kick off in the first quarter of 2022 and run throughout the year. The full-throttle action will stretch from North America to Europe through to the Middle East.

In addition to Nitro Rallycross’ internal combustion circuit, these teams will also square off in a transformational electric Supercar class debuting next year.

First Corner, a forward-thinking partnership between electric mobility leaders QEV Technologies (creators of racing’s gold-standard electric powertrains) and Olsbergs MSE, is readying the FC1-X. This revolutionary fully-integrated vehicle, built on a crossover SUV platform, is all-new from the inside out, and has been designed specifically for the rigors of Rallycross with direct input from teams and key stakeholders in the industry.

The most-advanced high-performance Rallycross vehicle ever built, the FC1-X produces 1,000+ peak HP with all-wheel drive. Wrapping that power in a lightweight tube frame chassis, it is capable of three g’s of acceleration as it rockets from zero to 60 mph in under 1.5 seconds before hitting a top speed of 180 mph. Yet with over 12-inches of suspension travel, the FC1-X is also tough enough to handle the steep berms and 100-ft gap jumps of NRX’s massive purpose-built tracks.

Carr says, “We are seeing a lot of excitement about the FC1-X. With nine sales already secured and more purchase orders expected soon, we are very confident that we will sell out the entire 16-car field ahead of our inaugural electric season in 2022.”

With the FC1-X, Nitro Rallycross is also an exciting property for OEMs. “In addition to offering teams unprecedented performance, the FC1-X will also provide manufacturers a record-breaking platform to showcase their new electric crossover SUV models, the fastest-growing category in the industry, in front of a global audience,” Carr explains.

Last month, the FC1-X made its track debut in a series of thorough systems checks, earning rave reviews from the drivers and technicians who put the platform through its paces. Soon, the wider motorsports community will be able to see what the game-changing FC1-X is capable of.

Launched in 2018 by motorsports icon Travis Pastrana and the innovators of Nitro Circus, Nitro Rallycross has revolutionized motorsport. With innovative purpose-built courses, banked turns inspired by the wide-open action of Supercross and short-form, head-to-head competition, Nitro Rallycross creates high-impact, thrill-packed racing. NRX’s custom-built permanent tracks - featuring the biggest jumps seen in motorsports – create unrivaled racing excitement. The full-throttle competition is now set to go global, as Nitro Rallycross expands into a full standalone championship series. Looking ahead to 2022, NRX will also add an electric Supercar circuit featuring the all-new FC1-X, the most powerful Rallycross vehicle ever built. For the latest NRX updates head to www.nitrorallycross.com and follow us on Instagram and Facebook.

This new chapter in Nitro Rallycross’ evolution is the latest initiative from Thrill One Sports and Entertainment, parent company of Nitro Circus, Street League Skateboarding and Thrill One Media (formerly Superjacket Productions). Thrill One has the backing of leading sports investment firms The Raine Group and Causeway Media Partners, also one of the initial investors behind Formula E. Go to www.thrillone.com for more information.

Rate this item
(0 votes)
Tweet
« What’s It Like Out There? Find out at Track Night in America Bridget Shines in First Road Course Race at Sonoma »