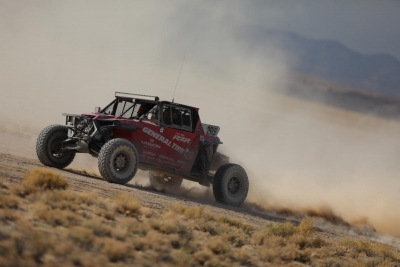 Professional off-road racer and nationally syndicated radio host Jim Beaver’s impressive start to the 2021 season continued over the weekend with his debut in the Legacy Racing Association at the inaugural Baja Nevada. In spite of numerous challenges for all competitors in the growing UTV Unlimited class over the two-day event, Beaver and the #2915 General Tire Polaris RZR team scored a second place class finish for their first podium of the year.
“It’s great to be back on the podium!” said Beaver. “We always knew this was going to be an incredibly challenging race, because it runs over two days and it’s one of our longest of the season. But we had a long night on Friday just making sure that we could make it to the start line for the second day, so to be rewarded for that effort with second place is incredibly satisfying. We’ve finished better every time we’ve run so far this year, so there’s only one place left to run, and that’s first. We can feel the win coming and we’re ready to take it!”
One of the most unique new events to pop up over the past few years, the Baja Nevada takes the two-day race format and extends it to point-to-point racing, rather than running a single loop. This meant plenty of attrition for racers and teams, who would need to manage the stresses of saving their vehicles for a second day while also navigating the normal logistics of a point-to-point event. Beaver and co-driver Brittney Cardone, along with teammates Trent Beaver and Bryant Shontz, would have to push through multiple mechanical issues on Friday, leading to an extended re-prep period overnight in Tonopah to get back to action on Saturday.
Most drivers in the Unlimited class had similar issues across the board, though, meaning it would be a battle of attrition to get to the podium. In the end, the #2915 team would be third after Friday’s action and make up quite a bit of ground on the leaders with a second place finish on Saturday, adding up to second place overall. The podium performance joined finishes of seventh at the season-opening Parker 250 in the winter and fifth at the Silver State 300 earlier this month, in the team’s first three races with its new UTV, nicknamed “Mona Lisa.”
Stay tuned for new episodes of the General Tire Down & Dirty Show Powered By Polaris RZR, Project Action, and more, as well as full coverage of the world’s premier action motorsports events on the new DownAndDirtyShow.com, which will be launched in the coming weeks. Beaver’s next planned event is Vegas to Reno in August, as strong runs in the first two Best in the Desert events will have him looking to chase the UTV Unlimited class championship.
Jim Beaver Motorsports is supported by General Tire, Vision Wheel, Polaris RZR, Rigid Industries, Fistful of Bourbon, GSP XTV Axles, DirtFish, Discount Tire, Gibson Exhaust, Rugged Radios, Pro Armor, HCR, Acronis, Impact Racing, Optimas Powersports, Northern Chill, Marwin Sports, and iRacing. For more information on Jim Beaver and the General Tire Down & Dirty Show Powered By Polaris RZR, visit DownAndDirtyShow.com, follow @JimBeaver15 on all social media channels, and follow @DownAndDirtyShow on Instagram.
Rate this item
(0 votes)
Tweet
« Everyone Benefits from AMR’s Safety Team Efforts in IMSA Beware of Caesar’s bearing gifts - the death of harness racing in Florida (and beyond) »