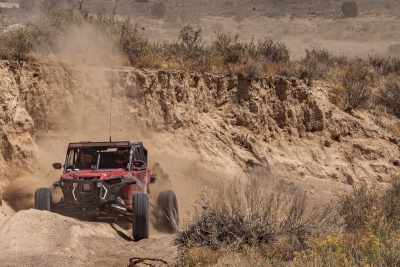 A busy month of May for professional off-road racer, nationally syndicated radio host, and esports team owner Jim Beaver started with a roar on Saturday, as the factory Polaris RZR racer scored a top five finish in the Best in the Desert Silver State 300. Beaver led the #2915 General Tire Polaris RZR team to fifth place in the UTV Unlimited division in “Mona Lisa,” once again showing podium pace but for a brief mechanical stoppage.
“We’re getting closer and closer to the top of the leaderboard with every race,” said Beaver. “Even though we’re disappointed not to have taken a podium at Silver State, it was still a huge weekend for us as we showed class-winning pace throughout. We know we’ve got a dominant Polaris RZR under us, and we’re not far off from earning the hardware that will prove it. Thanks as always to all of our sponsors, the organizers, and the fans who support us. We can’t wait to do it all again in two weeks at Baja Nevada!”
Starting sixth in the continuously expanding Unlimited division after a top-10 performance in his hometown Parker 250, Beaver would once again team up with his brother Trent and Bryant Shontz for the 278-mile event. The team’s only downtime during the day was a 12-minute stoppage to deal with a small belt issue. Beaver’s finishing time of 5:39:34.561 would, ironically, be just over 12 minutes off of first place, and just five minutes off of the podium in the hard-fought division.
Just two weeks after Silver State, Beaver will head back into the desert to make his first Legacy Racing Association start with the Baja Nevada on May 12-16. The unique event will feature two days of point-to-point racing, starting in Alamo on Friday, camping overnight in Tonopah, and finishing in Pahrump the following day. The combined course will total 630 miles, making it one of the team’s longest planned races of the year.
Stay tuned for new episodes of the General Tire Down & Dirty Show Powered By Polaris RZR, Project Action, and more, as well as full coverage of the world’s premier action motorsports events on the new DownAndDirtyShow.com, which will be launched in the coming weeks.
Jim Beaver Motorsports is supported by General Tire, Vision Wheel, Polaris RZR, Rigid Industries, Fistful of Bourbon, GSP XTV Axles, DirtFish, Discount Tire, Gibson Exhaust, Rugged Radios, Pro Armor, HCR, Acronis, Impact Racing, Optimas Powersports, Northern Chill, Marwin Sports, and iRacing. For more information on Jim Beaver and the General Tire Down & Dirty Show Powered By Polaris RZR, visit DownAndDirtyShow.com, follow @JimBeaver15 on all social media channels, and follow @DownAndDirtyShow on Instagram.
Rate this item
(0 votes)
Tweet
« Why Jon Bennett Came Back to Drive LMP3s Indianapolis the next step for Devlin DeFrancesco's Indy Lights challenge »