Rueschenberg Marching up National Standings With Port City This Weekend 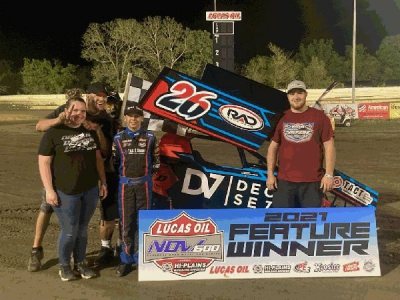 On the heels of a big victory at Creek County Speedway on Friday in Restricted A-Class in the NOW600 series, Corbin Rueschenberg of Mesa, Ariz. aims to continue his run towards the top of the championship this weekend at Port City Raceway. Rueschenberg will continue his charge through the standings in both A-Class and Restricted during the three-night Oil Capital Clash in Tulsa, Okla.

The three-night event at Port City Raceway will stream live on Flo Racing. Rueschenberg is in his rookie National Micro Sprint campaign, running fourth in Restricted and sixth in A-Class. His two wins in Restricted lead all drivers in the championship while his pair of top-tens have given the young driver a great start to his A-Class career.

Rueschenberg competed at Port City Raceway on March 20th with a second-place finish in Restricted. He raced at Port City on Saturday night in a regular-points race for the speedway with a fifth place in A-Class and a seventh place in Restricted. He finished second in his Restricted heat race on Friday at Creek County and second in his A-Class heat on Saturday at Port City. All told, Rueschenberg advanced 17 positions across heats and features over the two nights of racing.

The Arizona driver recently moved to the #26 Driven Performance Chassis for JPU Racing as he continues to battle for the national championships.