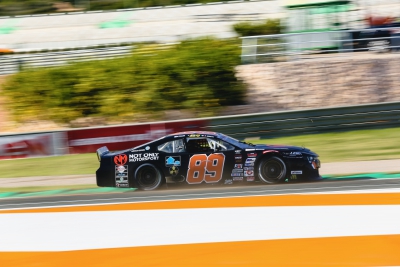 Not Only Motorsport for sure impressed in its 2020 NASCAR Whelen Euro Series debut season. The Italian team will expand to three cars for the 2021 campaign and bring a strong driver line-up to the tracks throughout Europe. Not Only Motorsport already signed two EuroNASCAR PRO, three EuroNASCAR 2 and two Club Challenge drivers for the upcoming season.

Davide Dallara will again join the team to drive the #89 Chevrolet Camaro in the EuroNASCAR PRO Championship. The 2020 Challenger Trophy winner – the special classification for silver and bronze drivers in EuroNASCAR’s top championship – scored five top-10 results in nine races over the course of the season.

Alberto Panebianco, who made his EuroNASCAR PRO debut with Not Only Motorsport Valencia in 2020, will share the car with Dallara to compete full time in the EuroNASCAR 2 Championship.

“I’ve been waiting for this moment for my whole life and it’s a dream come true”, said the Italian, who showed great potential at the Circuit Ricardo Tormo. “I’m very happy and so motivated to race in the EuroNASCAR 2 Championship. My aim is to experience a successful debut season and play my chances in the Rookie Trophy. We know that the level of competition is very high and I have to learn a lot as it’s my first year in racing. I’ll take the challenge and we’ll see how we progress during the season. Massive thanks to the Not Only Motorsport family for the opportunity, we are ready to fight!”

The #90 car will go into the hands of Andrea Nori in the EuroNASCAR PRO Championship. The former rally driver will be back on track after a break of about two years. The third Italian in Not Only Motorsport’s line-up already gained important experience during the first tests in a EuroNASCAR car and is ready to join the battle in Europe’s official NASCAR series.

“After being almost two years absent from racing, I’m finally ready to get back in the game”, said Nori. “I’m sure I’ve chosen a competitive championship that will bring me a lot of fun and satisfaction. I really can’t wait to get started! My expectations are high and with my team I will try to be right in the mix from the very beginning. I’m looking forward to racing in Valencia.”

Nori is joined by EuroNASCAR returnee Naveh Talor, who will be fighting for the EuroNASCAR 2 title with his new team. The Israeli made his NWES debut in 2019 and finished 14th in the overall standings after he competed in 11 of 13 races. In 2020, Talor made four starts during the Super Speedweek in Valencia for Not Only Motorsport. The 19-year-old collected four top-10 finishes so far in his young NWES career and showed great potential to become a real title threat in the EuroNASCAR 2 Championship.

“I’m really excited to be back with the Not Only Motorsport team in the 2021 season”, said the Herzliya native. “The whole team and its owner Luca welcomed me in last year’s Valencia event and showed me their potential and professionalism to be fighting at the top positions while allowing me to feel at home with the friendly atmosphere. I think together we can achieve great results as it will be my second or third time at some of the tracks which has never happened in my career. My goal is to constantly fight for the top 5 and to finally achieve some podiums and have the Israeli flag on the podium. Follow me and the team for inside content on all the races.”

Igor Romanov from Ukraine will take over the wheel of the #91 car in the EuroNASCAR 2 Championship. The journalist and race car driver always had the dream to become a NASCAR driver that he fulfilled in 2020 with his first race at Circuit Zolder, Belgium. In 2021, his amazing adventure will continue with Not Only Motorsport, the team he also represented in the EuroNASCAR Esports Series on iRacing.

“It was my biggest dream to become a NASCAR driver and that’s why I’m so happy to be here”, said Romanov. “I’m very grateful to my team Not Only Motorsport and the NASCAR Whelen Euro Series for the possibility to continue this beautiful trip. Sure our young team will be much stronger this season. Also during all this time I’ve made a lot of things to promote our series in Ukraine. Sure very soon you’ll see here more drivers from our region.”

Nicolò Gabossi, winner of the team’s “Become a NASCAR driver” challenge, and Simona Lenci will drive for Not Only Motorsport in the Club Challenge, the regularity based competition     that takes place on selected NWES race weekends. The NASCAR Whelen Euro Series season opener will take place on May 15-16 at Circuit Ricardo Tormo in Valencia, Spain. The Qualifying and all races will be broadcasted live on EuroNASCAR’s social media channels – YouTube, Facebook, Twitch – and Motorsport.tv.