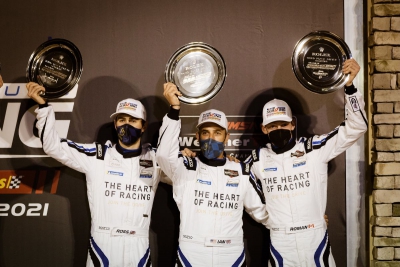 The Heart of Racing team will contend the remainder of the 2021 IMSA GTD Championship season with drivers Roman De Angelis and Aston Martin Works Driver Ross Gunn at the helm of the #23 Aston Martin Vantage GT3. Team Principal Ian James will join the pair for the endurance races.

De Angelis, 19, is in his second season with the team whilst continuing as a full-time engineering student in Canada. Meanwhile for Gunn, a highly acclaimed young works driver for Aston Martin, the drive will check off the inaugural full-season drive in the U.S. box on his resume.

“I am very excited to be able to pair Ross with Roman for the remainder of the IMSA series”, said James. “It has been my goal since January and I appreciate Aston Martin Racing giving our IMSA program the highest priority globally when assigning their young  factory star.  Roman has performed brilliantly for the team and I believe the 2 young guns will be a formidable pairing in the sprint races and everyone at Heart of Racing is excited for the remainder of the season."

The next race will be the Acura Sports Car Challenge Presented By The TLX Type S, May 14-16, at the Mid Ohio Sports Car Course.