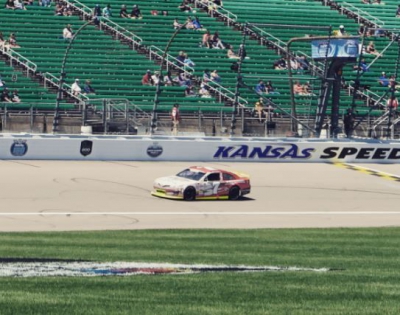 Saturday at Kansas Speedway ended in disappointment and frustration for Eric Caudell and the No. 7 CCM Racing team, finishing in the 14th position and retiring from the race due to crash damage after running only 66 of 100 scheduled laps.

With Five B Cattle on the hood of the car, Caudell started the race in the 14th position and ran into trouble early, spinning while trying to avoid a crash by Bret Holmes and Scott Melton in turns three and four on the first lap. Only the splitter sustained damage in the spin.

Caudell reported he was otherwise happy with the car.

Once the race resumed, Caudell reported a very tight condition, which crew chief Jeremy Petty attributed to the splitter damage. Despite this, Caudell was able to work his way up to the ninth position before eventually dropping back to 11th and losing a few laps to leader Ty Gibbs.

The caution flag flew on lap 50 for the scheduled halfway break. While under yellow, the No. 7 pit crew added fuel, changed four tires, and worked to fix the splitter damage.

The race resumed on lap 58 and Caudell quickly reported that the car was now very loose.

A few laps later, while trying to pass the No. 27 of Alex Clubb for the 10th position, Caudell lost control of the car and spun up into the outside wall.

Caudell drove back to pit road and the No. 7 team worked to repair the damage to the left side of the car. However, once back on track, Caudell reported a severe vibration, and Petty made the decision to bring it back to the garage and call it a day.

The team’s next scheduled race will be at Elko Speedway for the Elko 250 on Saturday, July 10, 2021 at 10:00PM ET. The race can be seen on MAVTV and TrackPass, with radio coverage on ARCARacing.com.