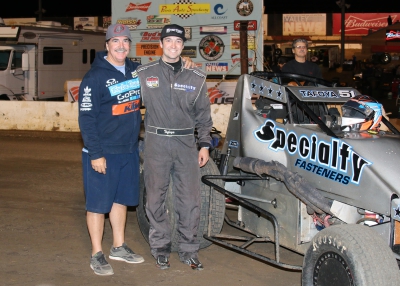 After a quick trip to Indiana to pick up the new chassis and to compete in a couple of races in the “Hoosier State,” Chino Hills, California based Tafoya and his crew got back home on Wednesday, leaving them plenty of time to prepare for the first sprint car race at Perris in nearly a year and a half.  Twenty-four cars signed into the pits for the night of open wheel action and 23-year-old Tafoya garnered a lot of  notice when he qualified fifth fastest with a lap of 16.59.  That placed him in the second 10-lap heat race where he started fifth and came home fourth.

The fifth fastest qualifying time and fourth place finish in the heat boded well for the driver who was the 2019 USAC/CRA Rookie of the Year.  It meant he would start on the outside of the front row for the 30-lap main event.

In a race that saw Tafoya lead one of the initial restarts, he never ran farther back than eighth (where he finished) and looked good in a car that was taking its maiden voyage west of the Mississippi.

Next on deck will be a USAC/CRA Series race at “The West’s Fastest 1/3 Mile High Banked Clay Oval,” the Bakersfield Speedway, on Saturday, May 8.

Tafoya will have his new shirts available at Bakersfield.  After the races, anyone who would like to purchase a shirt can visit the #51T in the pit area. For those who would like to acquire one, but who cannot make it to the track, can contact Tafoya on Instagram or Facebook.

Tafoya and his team would like to thank the following sponsors for being a part of the 2021 racing campaign.  Specialty Fasteners, Circle Track Performance, DRC Chassis, Ryder Racing Engines, Benic Enterprises, Simpson, and Bell. If you or your company would like to become a part of the team in 2021, please give them a call or send an E-mail to the contact information at the top of this press release.