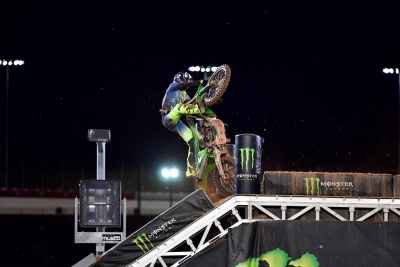 What's true in life is true in sports; sometimes what looks at first to be our lowest point is really the spark for our greatest moment. Such may be the case when a young Supercross racer would not stay down Tuesday night at Atlanta Motor Speedway.

Cameron McAdoo had every reason to, and by the laws of physics and anatomy he shouldn't have had a choice: On the opening lap of the 250SX Class Main Event, McAdoo mistimed a jump technique and sent his Kawasaki into a nose-down dive. The front wheel touched down and pitched McAdoo over the bars. His momentum slammed him into the near-vertical face of the next obstacle, a ten-foot high over-under bridge jump. That much alone often ends a season, and almost certainly ends a race.

But it got worse. The racer's motorcycle traced his trajectory and slammed onto him, crushing him flat against the wall of dirt. It got worse still. McAdoo's leg hung up on the bike, and as the machine's momentum bounced it into the air it swept the racer from the ground and flung him, arms outstretched, through a violent, arching front flip and deposited him with a final slam onto the top plateau of the jump obstacle.

McAdoo was immobile for the briefest of moments, then moved in a slow roll universally recognized as an indication of widespread pain. With an injured rider atop the obstacle and no safe way to help him down, the race was red flagged. By the rulebook, with fewer than three laps completed, the racers would re-load the starting gate and complete a full race re-start. One of those racers was Cameron McAdoo.

McAdoo was evaluated by the series' Alpinestars medical team and cleared to race. As a secondary check, another trackside physician gave the young, eager racer another evaluation. All the while the racer pleaded to be allowed to get back on the bike that had just thrown him and race again on the track that had just bit him. McAdoo sat only four points out of the title lead with three races left. Had the racers taken off without him on the re-start he would have lost touch with any hope of a 2021 championship.

The racer passed the concussion and body checks. He was sore but without major injury. His bike was bent up, but still running strong. The missing front numberplate as he re-loaded into the starting gate was an indicator that nothing was quite perfect… but he was back in the race.

When the gate dropped, McAdoo rocked off the steel-grate starting pad and emerged from the chaotic first corner in second place. Down the next straight he leapt into the lead for a flash of a moment but lost it back with a bobble in the next corner. He was pushed back to fourth. But McAdoo was there to race. In the first five and a half minutes of the 15-minute plus one lap event the exuberant racer let it all hang out. He passed two riders to reach second place, just 3.6 seconds behind Yamaha's Justin Cooper, the race and championship points leader.

The story didn’t end perfectly. Maybe the adrenaline wore off, maybe his energy reserves finally depleted, or maybe he didn't want to press his luck any further and he backed down his pace. But the leader steadily slipped away. As the race clock reached :00, signifying less than two laps remaining, McAdoo lost a position to Honda's Hunter Lawrence. About two minutes later McAdoo crossed the checkered flag battling, successfully, to retain his podium spot. The young racer next found himself on the winners' stage holding a trophy when 20 minutes prior a betting person would have put up the house that he was more likely on his way to the hospital for a cast.

Cameron McAdoo now sits nine points away from his first championship with two points-paying rounds left for his Region. One more at Atlanta Motor Speedway on Saturday, and another – a mash-up between regions where anything can happen, on May 1 inside Rice-Eccles Stadium in Salt Lake City, Utah.

Nine points in two races. It can be done. And if anyone can do it, a betting person might now put money on Cameron McAdoo. "Anything can happen in racing," is often said, and sometimes when that 'anything' happens it takes your breath away.