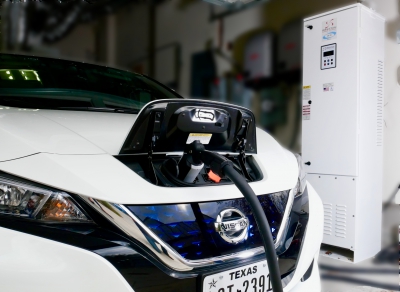 Pecan Street selected a team from the University of Illinois at Urbana-Champagne as the winners of the Vehicle-to-Grid (V2G) University Challenge. Pecan Street launched the global competition in October 2020 for university teams to develop V2G control algorithms that optimize residential fleets of electric vehicles for grid decarbonization and increased resiliency. The winning team will receive a $2,500 award.

V2G technology allows power to flow from the grid to an electric vehicle when the car battery is charging, and vice-versa, from the vehicle back to the grid. This allows V2G-equipped electric vehicles to act in aggregate as mobile power plants and individually as local energy arbitrage systems, which can improve the efficiency and value of intermittent renewable energy like solar and wind.

“There is clear policy and market momentum toward vehicle electrification, and V2G technology is key to creating an integrated, smarter, and cleaner transportation and electric grid system,” said Pecan Street CEO Suzanne Russo. “We launched the challenge to demonstrate innovative approaches that allow utilities to call on EVs to support the grid and integrate more intermittent renewable energy sources. That’s why we’re so excited to see these innovative proposals from the next generation of engineers who will help to make V2G technology a core benefit of electric vehicles.”

The University of Illinois at Urbana-Champagne team was led by students Shanshan Liu and Xi Cheng. Proposals were scored by a panel of leading energy sector judges from Austin Energy, Engie, and Shell Energy. The team will have the opportunity to work with Pecan Street’s engineers to demonstrate the efficacy of their algorithms in our lab using our first-of-its-kind V2G demonstration platform.

Liu and Cheng’s model used Pecan Street’s EV data from 50 households in Austin, TX to develop a V2G control model that successfully manages EV charging and discharging when electricity demand is low (valley filling) and when it is high (peak shaving). The team addressed rooftop solar intermittency by building a model that used Pecan Street’s real-world solar and EV charging data to identify when EVs could be used as energy storage systems. This was accomplished by directing vehicles to charge during times of rooftop solar generation and discharge during times of peak energy use in the home. For the fifty-home sample, the team determined that optimizing for rooftop solar production could reduce carbon dioxide emissions by a further 7% compared to regular EV charging, which is already a 67% reduction compared to the average gasoline car. Every one million EVs that adopt optimized charging for rooftop solar production would save 133,000 tons of carbon dioxide per year, which is equivalent to taking 26,067 gas-powered passenger vehicles off the road for a year. The team also demonstrated how time-of-use electricity customers could optimize EV charging for additional cost savings and emissions reductions.

“We were excited to participate in the V2G Challenge and put our operations research and data analytics skills into practice,” Shanshan Liu said. “Our submission used optimization to improve grid reliability with the management of V2G-equipped EVs and our algorithms flattened the duck curve with power and electric vehicle charging behavior constraints while accounting for household carbon dioxide reductions. We would like to thank Pecan Street for organizing this competition and the judges for naming us the winning team.”

More than thirty teams from ten countries registered to compete in the challenge. Teams were given complimentary access to Pecan Street’s globally unique datasets on residential energy use, EV charging and rooftop solar generation, as well as a simulation tool developed by Pecan Street’s engineers to test and refine their algorithms.