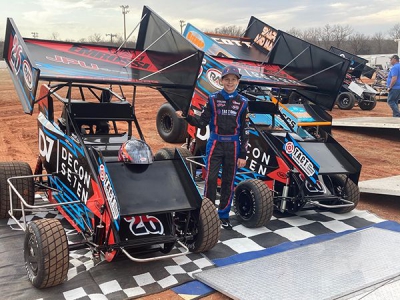 Corbin Rueschenberg will embark on an exciting and challenging 2021 season competing for the National Open Wheel 600 Lucas Oil National Championship this weekend at Red Dirt Raceway in Meeker, OK. Competing in both Restricted and Stock Non-Wing, Rueschenberg will look to steer his #26 Driven Performance chassis to the top throughout the busy year.

Rueschenberg’s experience outside of the West Coast is limited but that will quickly change as he races in the 30-race season across the Midwest. He will add marquee races across the nation and his pavement debut to his resume as well.

Major events on the calendar include the 22nd Annual Micro Sprint Nationals at Oklahoma’s I-44 Riverside Speedway and the High Banks Hustle at Southern Illinois Raceway in June, the Mark Hagopian Memorial in September in California, and October’s Cal Cup and Turkey Bowl in California.

His NOW600 races will be streamed live on RacinBoys.com while FastFourMedia.com will be on hand for many of the major Micro races across the country as well. His asphalt Late Model races on May 22, June 26, and September 18 at Madera Speedway are streamed live on YouTube then tape-delayed to MAVTV.